Margaret Fox was beloved by her family and friends 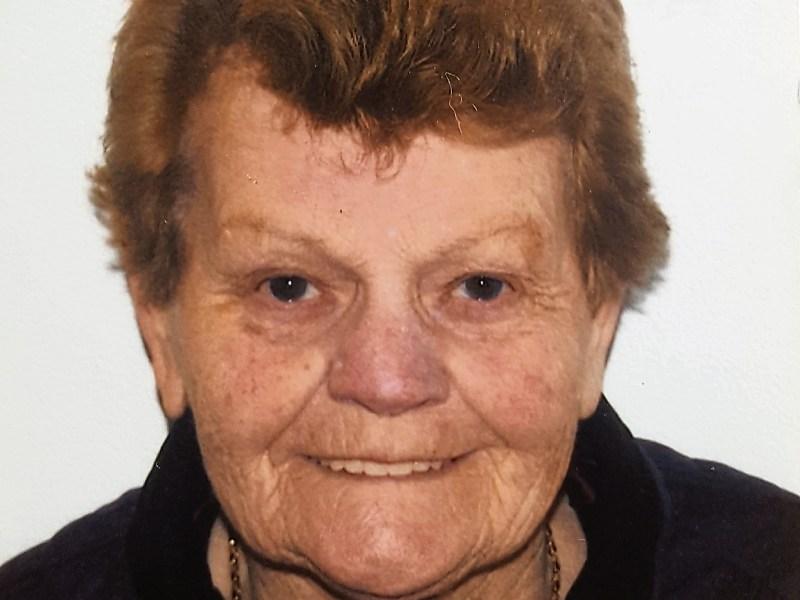 The death of Margaret Fox of Marian Park was very sad for her family as she was the fourth member of her family to pass away in little over a year. She was predeceased by her brother–in-law Larry O’Rourke senior in May last year followed by her brother, Jim in December and in January last by her sister and Larry’s wife Sheila.

Furthermore Margaret lost her husband Jim ten years ago, and daughter Sarah three years later, along with her brother, Brendan.

Margaret was one of 14 children in the family of the late William and Theresa McKeever. The family resided at Defender’s Row when she was born, and moved to O’Hanlon Park.

She was a pupil of the Convent of Mercy School, Mill Street. At the age of 14 she went to work, taking up employment with local cigarette and tobacco manufacturers PJ Carroll, then based in Church Street.

She worked there for a long period, during which she met Jim Fox at a dance in the AOH hall in Jocelyn Street. A relationship developed that resulted in the pair marrying in London after immigrating to England. They stayed in the English capital for a couple of years before returning to their home town.

Jim secured work with the ESB and the family settled in Marian Park where daughters, Helena and Sarah were born and reared.

She was a terrific homemaker and worked herself to the bone to provide the best of everything for her two girls. She was very house proud and loved her garden, while she loved the social outlet of a game of bingo.

She was very gifted with her hands, being a fantastic knitter, exemplified in that her handiwork knitting dresses for dolls for daughter Helena helped win many prizes .

She also was an expert at crochet, which she utilised to make all her grandchildren’s blankets, cardigans and Christening shawls.

She was very caring and would do anything to help anybody in need, and was a great neighbour.

She was lady of great faith, with a special devotion to Our Lady and to the Rosary. She was a member of the Legion of Mary.

She enjoyed a long and healthy life which she lived to the full until her health deteriorated in the last couple of months. Sadly the Lord called her home on Wednesday, July 12 in Our Lady of Lourdes Hospital, surrounded by her loving family.

She is re-united with husband, Jim, daughter, Sarah, sister, Sheila, brothers, Jim and Brendan and other close family members.

After reposing at her residence on Thursday and on Friday, Margaret was removed to Saint Joseph's Church, Fatima on Saturday morning

At the start symbols of Margaret’s life, including a bingo board and photographs of her family were laid before the altar by her nieces, Sharon Corcoran and Audrey McEntee.

The Readings were given by grandson, James Bellew and niece, Milanda Kelly, while the Prayers of the Faithful were led by grandson, Stephen Kenna, neighbour, Briege Bellew and Cathy Perry.

The Offertory Gifts were presented by sisters, Kathleen Doyle and Bernie Broadhurst.