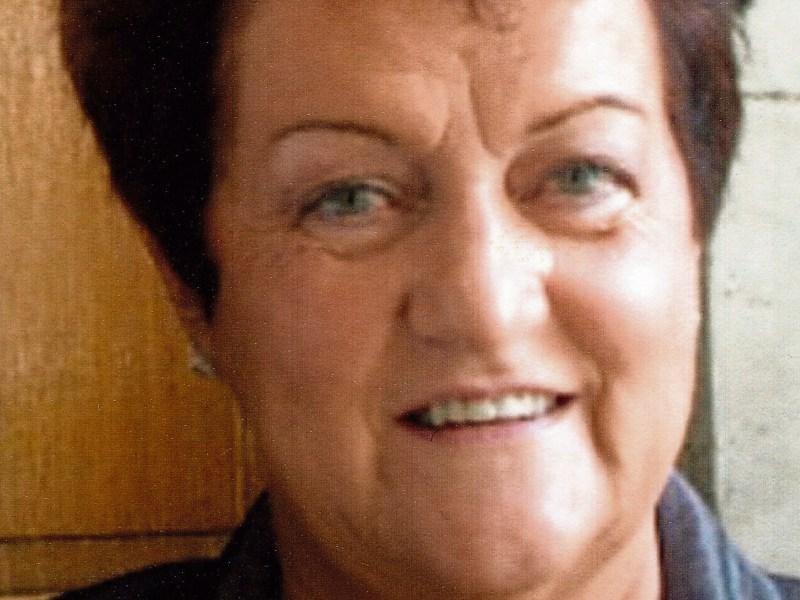 The death occurred following a long illness on Friday May 12th of Margaret Fearon (née McElroy) of Proleek, Mountpleasant, Dundalk, surrounded with the love of her devoted family.

Margaret was born in 1946 in Ballinagh, County Cavan to parents Frank and Katie McElroy (née McCague). Following the death of her beloved father in 1951, the family returned to her parent’s birthplace of County Monaghan. Margaret developed a special affinity for the county and considered it her spiritual home, visiting it regularly.

After her mother’s re-marriage to Bernard (Benny) McLoughlin in 1953, Margaret and her two siblings came to join the family at 31, Church Street Dundalk. On completion of her education at Saint Vincent’s Secondary School, Margaret successfully assisted with the management of the family business of the restaurant, B&B and gift shop until its closure in 1972.

She met her future husband Tommy in The Fairways Hotel on its opening night in 1967. They married on June 1st 1970 and settled first in Ard Easmuinn. They then built a home in Proleek, Mountpleasant, to which they moved in 1975 and where Margaret resided until her death.

They raised a family of three there – Angela, Cathal and Alice. Margaret was a devoted and supportive full-time mother to her children, always looking out for their welfare and providing counsel, guidance and reassurance throughout. She was equally supportive of her four grandchildren as they arrived, adored their company and played an important role in their upbringing.

She had a myriad of friends, some of them dating back to her early school years. Always sociable, she loved being out and about meeting old and making new friends. Family and friends were always made to feel welcome in her home where she loved to entertain.

The family enjoyed holidays in Ireland when the children were small and in later years she and Tommy ventured further afield to more exotic destinations with some of their lifelong friends.

Margaret’s talents were many; she was an avid reader of newspapers and could debate with the best of them on any subject. She had a remarkable memory and could recount stories and names, dates and times with precision. She loved the theatre and in particular The Abbey Theatre in Dublin. She was accomplished at needlework, both knitting and lacework and was a champion Irish dancer in her youth. Her strong faith, with Padre Pio being a particular favourite, led her to serve as a Eucharistic Minister for many years in Saint Mary’s Church, Ravensdale.

As Margaret’s illness progressed her family were fortunate to be able to care for her in the comfort of her home, due in part to her wonderful team of carers, especially Briege and Nicola. They developed a special rapport and were added to her circle of friends.

Margaret is survived by her beloved husband, Tommy, her much loved children, Angela (Magennis), Cathal and Alice (Hoey), her cherished grandchildren , Niamh and Dónal Magennis and Ronan and Ellie Hoey and loving sisters and brother, Angela (Dundalk), Renee Kenny (Maidstone, UK) and Frank (Georgia, USA), her sons-in-law, Ciaran Magennis and Gerard Hoey, extended family and a large circle of friends. She was predeceased by her parents, Frank and Katie.

After reposing at her home, Margaret’s remains were taken to Saint Joseph’s Redemptorist Church for Requiem Mass which was celebrated before a large congregation by Father Patrick Rushe.

Before Mass gifts symbolising Margaret’s life were brought to the altar by her daughter, Alice, her niece, Stephanie Kenny and her sister-in-law, Mary Heeney. The Readings were read by her sons-in-law, Ciaran and Gerard. The Prayers of the Faithful were led by her grandchildren, Niamh, Dónal, Ronan and Ellie.

The Offertory Gifts were brought to the altar by her sisters, Angela and Renee. Many of her favourite hymns and pieces of music were performed by soloist David Martin, organist Trevor Clarke and accompanied by Margaret’s cousin Mary McCague on the violin. She was laid to rest afterwards in St. Patrick’s Cemetery.

Margaret will be eternally loved and missed by her surviving family and friends.