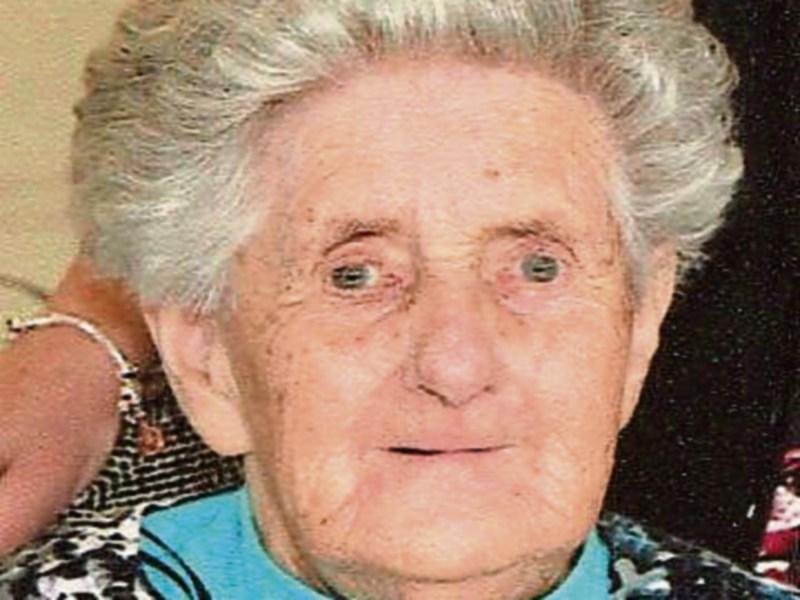 The death has taken place in her 92nd year of Bessie Treanor, Bridge Street, Dundalk.

She passed away on April 20, 2017, in Our Lady of Lourdes Hospital, Drogheda, surrounded by her family.

Bessie was born on April 2, 1926, the eldest of six children of James and Margaret McCourt, Lower Rath, Carlingford. She had the distinction of being in the first ever class of the Bush Technical School.

Christened Elizabeth, but always called Bessie, she came to Dundalk to work in Watters café, Earl Street, where she met her future husband, Pete Treanor. He used to go to the café for his lunch.

They subsequently married, and she settled in Bridge Street as a young bride in 1954.

It was a very different street compared to now. Traffic ran in both directions for a start, and families lived over shops, and were very proud of their neighbourhood.

The couple had three children together, Peter first, followed by Noeleen and Annette.

In her eulogy at the funeral Mass, Annette recounted that Noeleen was born the day after RTE began broadcasting, and Pete was extremely busy putting up television aerials!

Pete and Bessie were the only ones from each of their families to live in town. So when their siblings came into Dundalk to do some shopping, it was a given that they would call for a cuppa on the way home. There were always home-baked goods on the table. Victoria sponge was Pete’s favourite, with Bessie buns for the kids, and scones and apple or rhubarb tarts at the weekend.

When grandchildren came along, they loved baking with their nana, and the cakes never lasted too long afterwards.

Family members who worked in town were always given a hot dinner in Bridge Street. All this was done while Pete ran the shop. Bessie took over there when her husband went out to put up an aerial or fix a television.

She enjoyed putting a few bob on a horse in the bookies next door, and was a woman of great faith in Our Lady and Saint Gerard. She did Saint Gerard’s novena every year for over 65 years, and afterwards would have a big win at either the bingo, horses or on the scratch cards. “Saint Gerard sent me that”, she would say.

A lady very much involved in the community in Dundalk, she worked on a number of committees. A life-long member of the Pioneers, Bessie worked tirelessly for the association, and she also gave many an evening to the past-pupils committee of the De La Salle.

Summer fetes and Christmas bazaars were the highlights of the fundraising which helped the school move from old prefabs in De La Salle Terrace to the current location on the Castleblayney Road.

Bessie’s favourite committee was probably the Castletown guild of the ICA. She would come home after meetings with plenty of laughs to share. The weekends away with the ICA were her holidays, and she even baked buns for the train journeys. The loss of her dear sister, Mary hit her hard, and when Pete died the following year it was a hard time for her. Both she and Pete were born and died in the month of April, Pete passing away on his birthday.

He was a founder-member of Roche Emmets GFC, and Bessie was a fervent supporter of the club. She attended the day care unit at Saint Oliver’s every Thursday, and the care she received from the nurses, Mary, Margaret and Paula, and from Janet and Michael, gave her something to look forward to each week. She also found a new friend in her carer Esther who looked after Bessie with absolute tenderness.

Bessie was predeceased by her parents, James and Margaret, brother, Dermot (Carlingford), sisters, Mary Coburn (Kilcurry) and Mairead Mooney (Manchester) and by her husband, Pete.

Readings were given by daughter, Noeleen and niece, Mary Keating and daughter, Annette led the Prayers of the Faithful.

Dymphna McCrave and Laurence Coburn participated in the Offertory procession.