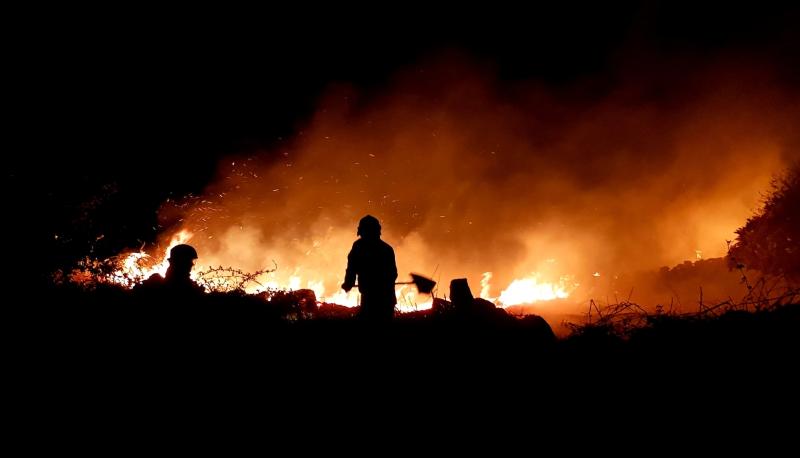 A delegation from Cooley IFA met with a Director of Services Joe Mc Guinness in Louth County Council via teams regarding some uncontrolled fires that have taken place on the Cooley Mountains recently.

Also present was the Chief Fire Officer and local fire officer and a representative from Coillte and local Sargent John Brady.

The Chairman of the Cooley Branch Matthew McGreehan said all agreed to work together and to identify high risk areas and put a plan in place to prevent uncontrolled burning, “when massive areas are burned it has a negative effect on the biodiversity and habitats and also fencing has been destroyed from a fire that was started from the road and burned to the fence line, uncontrolled burns are in no ones interest and we plan to work together with the authorities to prevent this happening.”

Also discussed was scramblers and quads using the mountain for scrambling.

Matthew McGreehan said shareholders do not want to see their mountains ripped up and been turned into a dirt track for scramblers and we would ask the people who are doing it to stop,he said when people are out for a walk on the mountains they want to enjoy the peace and tranquility and they don’t want to be met by these roaring scramblers tearing past them.

Also discussed was the issue of hill walkers bringing dogs to the mountain which the majority of shareholders don’t want.

As public meetings cannot be called because of Covid Matthew McGreehan said if any farmer would like to discuss any of the above issues please feel free to contact him or Louth IFA sheep chair Ciaran Sheelan or Louth IFA Hill Chairman Peter Shields.