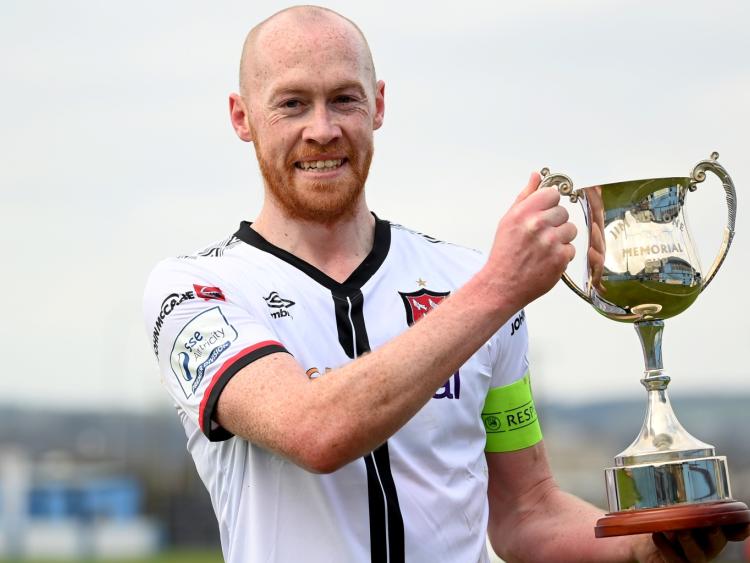 Dundalk captain Chris Shields with the Jim Malone Cup following the match between The Lilywhites and Drogheda United at Head In The Game Park. Photo by Stephen McCarthy/Sportsfile

Dundalk FC captain Chris Shields collected the Jim Malone Cup on Saturday afternoon after The Lilywhites recorded a 3-2 win over Drogheda United at Head in the Game Park.

David McMillan, Val Adedokun and substitute Greg Sloggett all got themselves on the scoresheet, as Dundalk won the annual pre-season competition for the sixth time running.

Dundalk started brightly and Ryan O’Kane, who impressed in last week’s friendly win over Bohemians, fired over the game’s first shot from distance after just two minutes had elapsed.

The Lilywhites were denied what looked to be a stone-wall penalty when Junior Ogedi-Uzokwe, from McMillan’s through ball, was upended inside the box by James Brown.

From a set-piece, a peach of a cross from the left was delivered by O’Kane and the completely unmarked Andy Boyle diverted his header wide, with David Odumosu beaten.

Despite those early chances for Dundalk, it was Drogheda who took the lead inside 20 minutes when Brandon Bermingham’s cross from the right was headed home by Chris Lyons.

Dundalk were awarded a penalty five minutes later, however, after a neat exchange between youngsters Adedokun and O’Kane saw the latter tripped up inside the box by Luke Heeney. Up stepped the more experienced head of McMillan, who sent Odumosu the wrong way.

Dundalk’s new goalkeeper, Alessio Abibi, endured some nervy moments in the opening half, but the Albanian did get down well to save at his near post from Bermingham’s attempt.

The visitors took the lead on 37 minutes when Junior’s ball from the right found its way to Adedokun, with the 18-year-old showing tremendous composure to finish and make it 2-1.

Drogheda started the second period brightly and Ronan Murray – a Malone Cup winner with Dundalk in 2018 – fizzed a shot just wide of the post shortly after the game had restarted.

Indeed, the hosts equalised on 52 minutes and it was Murray that exquisitely lifted his free-kick up an over the wall and into the top corner, with the despairing Abibi well beaten.

Seconds later, Murray had another free-kick, but this time he slipped in Lyons who then cut it back for defender Daniel O’Reilly, but he blazed over when it looked easier to hit the target.

Two substitutes combined for what ultimately proved to the game’s decisive goal on 67 minutes, when Patrick McEleney’s free-kick from the right was headed home by Sloggett.

Dundalk had chances to extend their lead in the closing stages, with a Raivis Jurkovskis cross headed over by Junior before Patrick Hoban saw his flashed effort stopped by Colin McCabe.

Introduced at half-time, McCabe was on hand again to save from Junior’s free-kick, while Hoban saw another shot saved by the replacement Drogheda ‘keeper deep into stoppage-time.

That was the final kick of what was an entertaining pre-season affair between the Louth sides, with Dundalk starting their competitive season in next Friday night’s President’s Cup game.