1862 edition of the Dundalk Democrat discovered in Cork 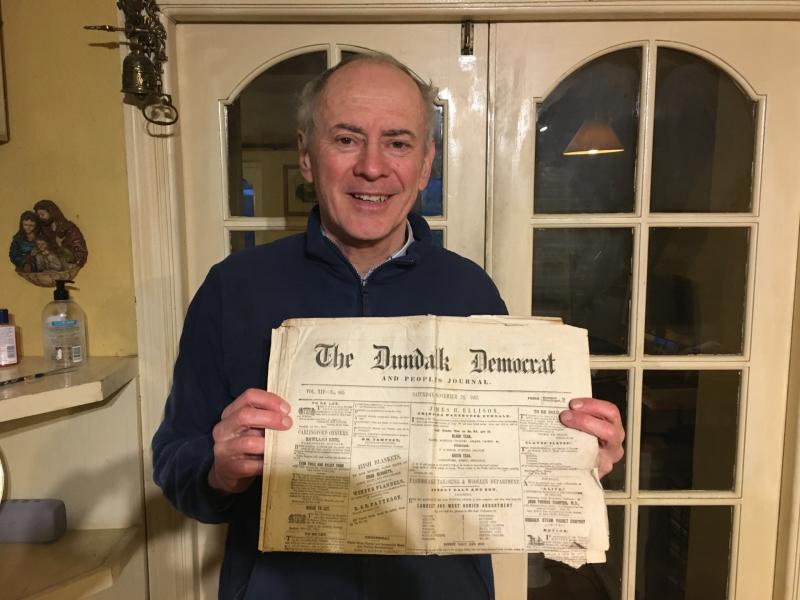 A little bit Louth history was unearthed recently with the discovery of a nearly 170 year old edition of the Democrat, which has been publishing news to the Wee county and beyond since 1849.

The paper, then known as The Dundalk Democrat and Peoples Journal was remarkably discovered all the way in Bandon, county Cork by Conor Nyhan who came across the 1862 edition of this newspaper inside a chair while doing some spring cleaning in his home.

“We were doing a tidy up recently and the cushion fell off one of the stools and we saw the compartment below it which was full of content” he stated. “There was some sheet music inside but in amongst them was this old paper.”

The stool in question was an old piano chair he and his wife had inherited from her father, yet the couple have no idea how the paper ended up in their home.

“We have the chair over ten years, my father-in-law Jimmy Ruane died in 2009 and we actually got the chair maybe the year before, so it has been in the house for a long time at this stage.”

“He used to buy antiques sometimes so the item was probably bought at an auction, possibly up in Dublin which would explain why the paper was inside the chair. I wouldn’t think he even knew he had it”.

It was the last thing the couple expected to find while cleaning, yet what amazed them most was not that a Leinster broadsheet had made its way all the way to the Rebel county but the actual condition they found it in despite its old age.

“We were surprised to find it and anyone I showed it too were gobsmacked by it. The page was one giant page and it kept folding over and over as that is the way all the newspapers seemed to be back then, the print was a bit faded, but the condition was not bad for how old it was.”

Having sift through the paper, the Cork man found it to be a great read but was particularly taken aback by one article that week whereby the Democrat reported about the misfortune that had hit one sailor while working.

“A piece I found interesting in it was about some man that was working on a ship and he got trapped, the tide came in and they couldn’t get him out. The priest came in and they blessed him, but he was left to drown which is harrowing as they had no way of retrieving him.”