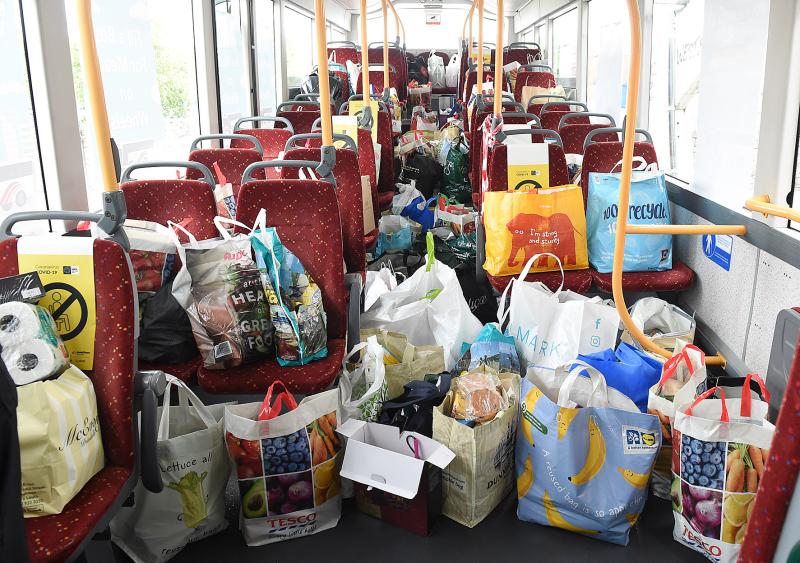 The bus filled with goods for Meals on Wheels

Bus Éireann’s “Fill A Bus” campaign to support Meals On Wheels Dundalk was a roaring success last Thursday, with food provided set to go those who need it across the town.

The campaign, which is now in its second year, is done to help gather up food to be used in the preparation of meals for people who need them all across Dundalk.

John Hennessy of Meals on Wheels Dundalk said that the event in 2021 was a huge success, and that the reaction and support of people across the town was even better than in 2020.

“The reaction today has been better than last year, I really am surprised,” said Mr Hennessy.

“Last year we filled the bus and this year we have more than we had last year, so I’m pleasantly surprised. It’s brilliant.

“It will all go to a good home as well.”

According to Mr Hennessy, whatever food isn’t used in the cooking process within the Meals on Wheels facility will be packaged up into hampers, to be given to people who use the service.

“It’s great to be involved because people are really really genuine and they’re very happy to see us.”

Mr Hennessy says that the Meals on Wheels programme in Dundalk has grown significantly since it was first launched in 1972 with just 11 meals.

“People need meals, so we try to do our best,” said Mr Hennessy.

Mr Hennessy said that for the charity, fundraising comes easy due to the attitude of the people of Dundalk who have supported them since they began.

“People just give generously, either in money or in food,” said Mr Hennessy.

“They’ll always look after us, which is great.”

The fundraiser itself lasted from 9am until 4pm, with groups of people arriving to donate food and funds to the charity.

Service Manager for Bus Éireann, Joanne Duffy, said that the company were delighted to support the charity for the second year.

“We are absolutely thrilled with the success of the second Bus Éireann “Fill a Bus” appeal for Dundalk Meals on Wheels,” said Services Manager for Bus Éireann, Joanne Duffy.

“The local community were out in force all day and I’m delighted to say that we received over 2,000 donations, exceeding all our expectations.”