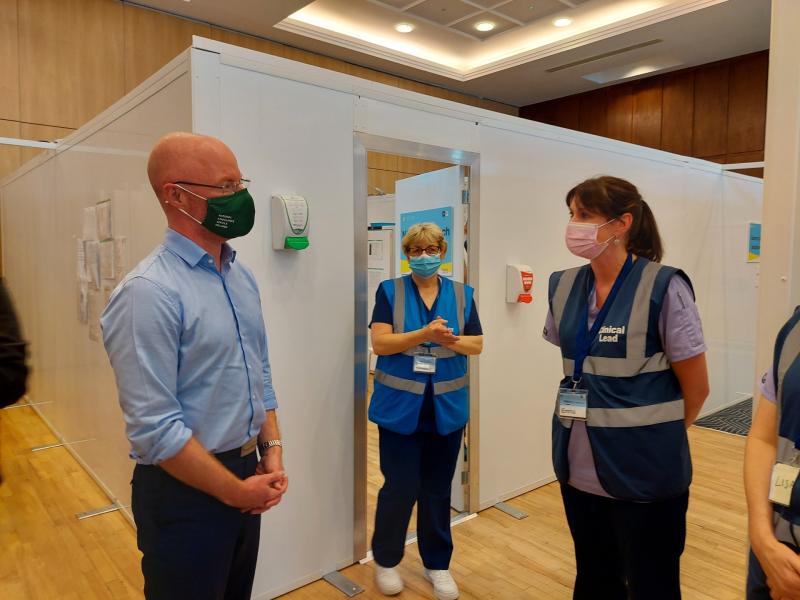 The number of 12 to 15-year-olds who have registered for a Covid-19 vaccine has hit over 90,000, according to Health Minister Stephen Donnelly.

The Health Minister made the announcement when speaking to the Democrat at the Fairways vaccination centre in Dundalk this afternoon.

"The very latest information we have on the vaccine rollout, especially for younger people is incredibly positive," said Minister Donnelly, speaking to the Democrat.

"We've had over 90,000 registrations of 12 to 15-year-olds since the portal opened on Thursday, which is absolutely phenomenal.

"70% of 16 and 17-year-olds have registered to be vaccinated already, and there's more coming in

It is understood that approximately 500 people between the age of 12 to 15 were vaccinated in the Fairways vaccination centre last weekend after the portal opened on Thursday.

The vaccination centre is also on track to hit over 61,000 vaccines administered within the coming day.

Minister Donnelly arrived at the vaccination centre earlier this afternoon, and spoke with staff around the centre about the work they have been doing for the last six months.

He praised the work of the staff, saying that due to their work Ireland had the "most successful" vaccine programme in the EU.

"We have, many people would say, the most successful, the best run vaccination programme anywhere in Europe and that's thanks to the amazing women and men here [Dundalk] and all over the country who are doing such incredible work."

Minister Donnelly told the Democrat that there was some concern within Government about the high case levels, not just in Dundalk, but across the country.

The latest figures available show that the incidence rates for Dundalk and surrounding areas remain high, with Dundalk-Carlingford having a 14-day incidence rate of 921.9 per 100,000.

"I am concerned about the level of cases and it's not just Dundalk, it's all over the country," said Minister Donnelly.

"Right now, we have the second-highest 14-day incidence rate anywhere in the EU, and that's not where we want to be."

The most recent 14-day incidence rate across the entire country is 482.8 per 100,000 population, updated yesterday by the Health Surveillance Protection Centre (HSPC).

Minister Donnelly urged people to get vaccinated and to follow the current public health guidelines to help reduce case numbers across the country.