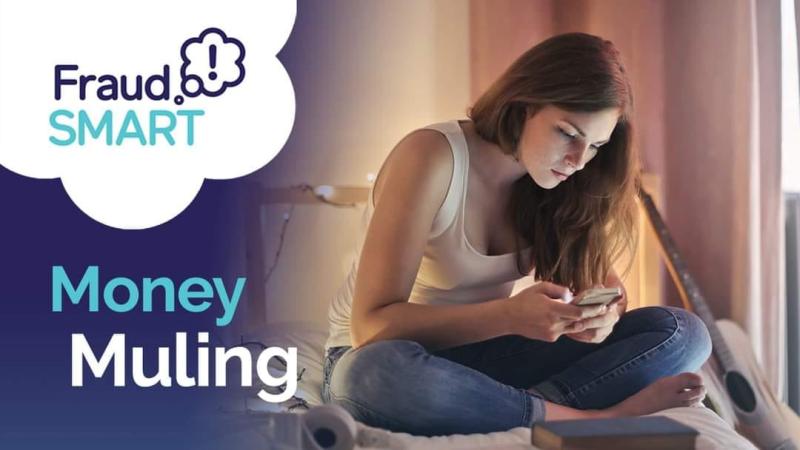 An Garda Síochána has issued an appeal to young people and parents to be wary of the dangers and consequences of money muling, as new figures show over 700 money mule transactions, totalling over €5 million have moved through accounts in Ireland in the first half of 2021.

New figures released by FraudSMART, the fraud awareness initiative led by the Banking and Payments Federation Ireland (BPFI), highlight the seriousness of the situation.

With the vast majority of incidents involving bank accounts belonging to those aged between 18 and 24 FraudSMART is renewing its appeal to young people and their parents to be aware of the dangers and potential lifelong consequences of getting involved in money muling.

Speaking on the risks involved Brian Hayes, Chief Executive, BPFI said: “Criminals are deliberately targeting teens and young adults when recruiting money mules so it is critical that this age group as well as their parents fully understand how these crimes operate and how they can avoid getting caught up in it. This is pertinent now more than ever in the current pandemic with less part time or summer employment opportunities available to young people due to public health restrictions. Criminals are very aware of this and very much seeking to capitalise on this.”

“Money mules are typically recruited though social media in what appears to be a friendly approach by the criminal offering ‘easy’ money in return for something which appears as simple as opening a new bank account on behalf of the criminal or using their bank account to lodge or transfer money. While money muling might initially appear to be an easy fix for those who are struggling financially or want to make some extra money, young people need to be aware that money muling is effectively money laundering and therefore a criminal offence.

Serious consequences
Mr Hayes continued: “The consequences of becoming involved in muling are serious and can have a lifelong effect. Teens who are recruited as money mules can be threatened with violence or physically attacked if they do not continue to allow their account to be used by the criminals to transfer money.

“As well as having a criminal record, money mules who are caught face having their bank account closed and will have difficulty opening another account and accessing loans or other credit facilities in the future.”

“We are calling on young people to familiarise themselves with the red flags and what to look out for in order to avoid becoming involved. We are also alerting parents to the signs they can look out for and encouraging them to talk to their children about this issue.”

An Garda Siochana has highlighted the issue this weekend, and has posted further information on social media.

Beware if you receive an unsolicited e-mail or social media message that promises easy money for little or no effort.
Never agree to open a new bank account in your own name in order to receive a transfer/inbound payments on behalf of the criminal.
Do not accept any job offers that ask you to use your own bank account to transfer money – a real company will not ask you to do this.
Never give your financial details to someone you don’t know and trust, in particular if you have met them online.
Acting as money mule can damage your credit and financial standing.
Do you think your child is a victim? Red Flags for Parents/Guardians

Be on the lookout for signs of your child suddenly having extra money or becoming secretive, withdrawn or stressed.
Additional red flags include the appearance of increased spending on new clothes or technology with very little explanation as to how they got the money

Teens are particularly at risk because they are often unaware of the true nature of the activity that they are undertaking. They are attracted by the lure money in return for the use of their bank account to move money on behalf of criminals.

If you think your child may have become a victim of money muling, contact your local Garda station and inform their bank immediately.

Being a Money Mule is a criminal offence under the Criminal Justice (Money Laundering and Terrorist Financing) Act 2010 and it can carry up to 14 years imprisonment.

A host of material including on Money Mules including information leaflets for young people and parents can be found at www.fraudsmart.ie.

Louth sporting organisations set to get €364,000 in equipment funding boost