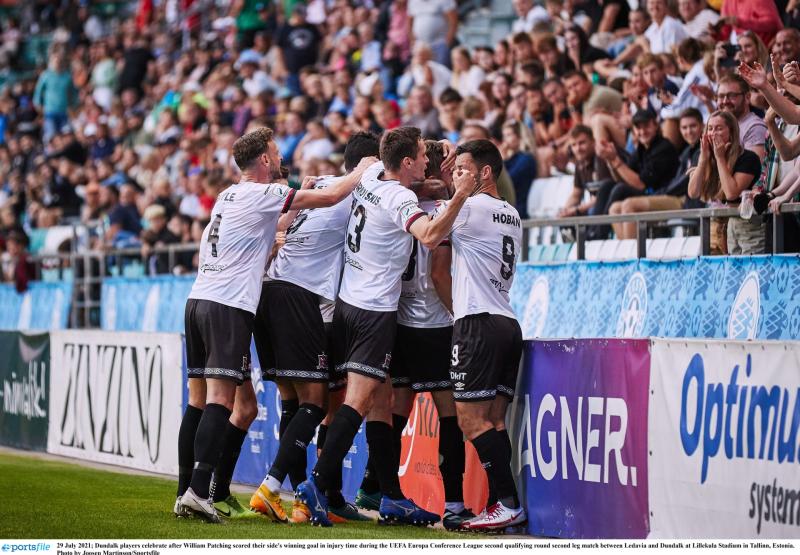 Dundalk celebrate after Will Patching scored winning goal during the UEFA Europa Conference League between Levadia and Dundalk. Photo by Joosep Martinson/Sportsfile

It’s hard watching Dundalk FC play in European competition these days. Not because the quality and standard of play is poor, more that the time the games are played at has not been good from a work point of view.

Last week’s thrilling stoppage time win over Levadia Tallinn in Estonia kicked off at 5.30pm, which might fit seamlessly into the lives of others, but work was still pawing at me on Thursday evening and I couldn’t really divert from it and give the match my full attention.

I had to make do with regular, sneaky, Twitter updates, including from the Democrat’s own man on the Oriel beat, Niall Newberry.

Saying that, another issue which is not helping is that last week’s game was only available via online stream with LOI TV.

I haven’t used the service thus far so I can’t speak for its quality, but I simply keep forgetting that certain games can be viewed on that platform.

Thankfully a 6pm kick off for their next clash with Vitesse Arnhem might make it possible to catch a butcher’s of the action. Perhaps I’m just a little old fashioned, but I still prefer to watch my footie on the big telly in the front room with a George Hamilton-type calling it for me.

I was listening to a podcast last Wednesday - The Press Box - in the build up to Thursday night’s fantastic victory, which is hosted by two local lads - journalist James Rogers (formerly of this parish) and business owner Craig Colgan - something they were riffing on about hit home when I reflected on it later that evening.

The sense of excitement and spectacle and general happiness around the town as the club started into another European run has been glaringly absent this year.

Now there’s a sizable caveat to that statement - the still ongoing global pandemic has hugely impacted the attendance of any spectators at any sports events over the past 18 or so months and that, of course, has knocked any build up or local mood hard.

But, as the lads on The Press Box suggested, there’s more to it than that. There is a nagging and worrying feeling of apathy about it all.

It was even there last year when the Lilywhites made another historic and quite unexpected run to the Europa League group stages.

There they played a (perhaps fallen) behemoth of the global game in Arsenal, along with historic European regulars Rapid Vienna.

Fair enough, Molde from Norway may not be classed as traditional heavyweights, but they are an emerging side with a budget far outweighing anything Dundalk can put together.

These are, in relative terms, huge clubs and Dundalk were competing far beyond themselves.

And yet, last year that kind of major moment passed off with a somewhat dampened feel to it.

Yes, Covid made a balls of everything, but with ongoing boardroom issues and a lack of being able to actually host big European games in the town itself, you get the feeling that many out there on the streets of Dundalk are glazing over a bit whenever the Oriel Park side are competing - above their station, most of the time - in European action these days.

Firstly, the boardroom and ownership debacle. Whatever may be going on in the background - be it good, bad, and/or ugly - the vacuum of external communication from Oriel Park is a problem in and of itself.

So much rumour and conjecture gets flung about on social media and elsewhere that a lot of untruths are probably being taken as fact. This doesn’t help anyone’s cause, but it is not helped by the radio silence from the Carrick Road club itself.

It’s hard, and probably unfair, to compare the dizzying glory days of 2016 to last year. In 2016 the club was owned by two local lads that, by all accounts, left the footballing side of the club to those that understood football. Andy Connolly and Paul Brown wrote the necessary cheques and looked after the business side of things.

As a model, for Dundalk FC anyway, it seemed to work very well indeed. The team were out performing themselves regularly, winning most domestic competitions and the club was financially in a healthy position.

When Peak6 took over the club in early 2018 there seemed to be a lot of American lads with varying titles at the head table when they introduced themselves to supporters in the YDC. Most of these figures are no longer involved with the club in any way, shape or form. That’s a lot of movement and change within a short few years.

Upheaval can be both good and bad for a company; sometimes it can incentivize and inspire and bring new ideas into a business which needs to stay fresh and agile.

For a football club, constant shifting and changing at the top is nearly always a bad thing though. Stability helps a football club grow; gives it a solid foundation and good things can happen when the right people are involved.

Yet despite the constant upheaval and internal squabbles, Dundalk have still managed to perform decently on the pitch - last year’s group stage run and this year’s ongoing run, a case in point.

In domestic competition this year, the Lilywhites have been found wanting, unfortunately. It does seem that the reintroduction of Vinny Perth as head coach has been a force for good, but he’s on a short-term contract to the end of the season - hardly the best way to begin a new dynasty of success at Oriel Park.

Then there’s the lack of a decent ground for Dundalk FC. Oriel Park is a glorious mess of a ‘stadium’. So much has been written about how decrepit it is that I don’t need to expand on that discussion any further here.

But it's simply not good enough for the current team and it was certainly not good enough for previous incarnations either.
Last week Dundalk FC welcomed “the establishment of a Stadium & Facilities Redevelopment group, focused on developing a Category 3 stadium and supporting facility as a Centre of Excellence for sport, entertainment and business in the North East” (from the official Dundalk FC press release), which was great to read.

But we’ve all been down this road before, where attractive stadium plans have been drawn and solid verbal commitments have been made, but nothing ended up happening.

I’ll watch this space in terms of the current proposal, but I’ll certainly not be getting my hopes up just yet of a stadium being built in Dundalk which can host the likes of the big European nights that Tallaght has in recent years.

Sadly, the death of a club legend - Tommy Connolly - occurred last week. I wasn’t talented enough footballwise in my youth to have the opportunity to be coached by him, but others I know who did, have spoken incredibly highly of a wonderful footballer, coach and most importantly, human being. Rest In Peace Tommy.