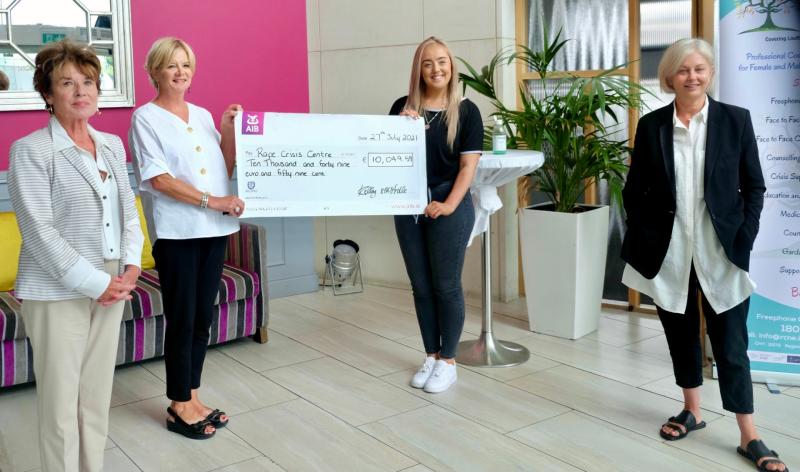 A former ‘Voice of Ireland’ contestant, with a CPD Diploma in song writing from DIT, Kelley’s ‘Shine a Light’ was her first single.

The inspiration for the singer and songwriter's first album came from a dark period of her life when she turned to the Dundalk centre for support and used the medium of song to let her feelings out and begin the healing process.

Kelley picked the Rape Crisis Centre as the charity she wanted to raise funds for saying “they helped me out of the darkest time in my life, this is my time to give back”.

And the singer managed to raise €10,000 for the two charities which she presented to them last week.

"It was such a lovely afternoon, and the first time I got to finally meet them in person after being in contact for the last eight months regarding my "Shine A Light" fundraiser.

"I am absolutely thrilled to have hit my target of €10,000, and was even more delighted to be able to present the cheques to such amazing women."

Kelley is currently preparing for the release of her upcoming single "Beat That Face" on August 8th, which will be released to music platforms including Spotify, iTunes, Apple Music and TikTok.

Kelley said her second single is a contrasting sound to “Shine a Light” with it having an upbeat catchy flow to it.

Kelley told how she has a has a wide variety of influences such as Lady Gaga, Michael Jackson, Queen, Eminem, Ed Sheehan and Ariana Grande.

After successfully releasing her debut single, raising over €10,000 for Rape
Crisis North East and Dublin, Kelley is now focused on her brand new fun song “Beat That Face” which is a song about makeup and getting ready for a night out.

For more information on where else you can catch “Beat That Face” check out Kelley’s music page on Facebook and Instagram.

Bonus €147,000 in funding for rural road repairs and maintenance

Memorial service to be held at Dundalk Famine graveyard