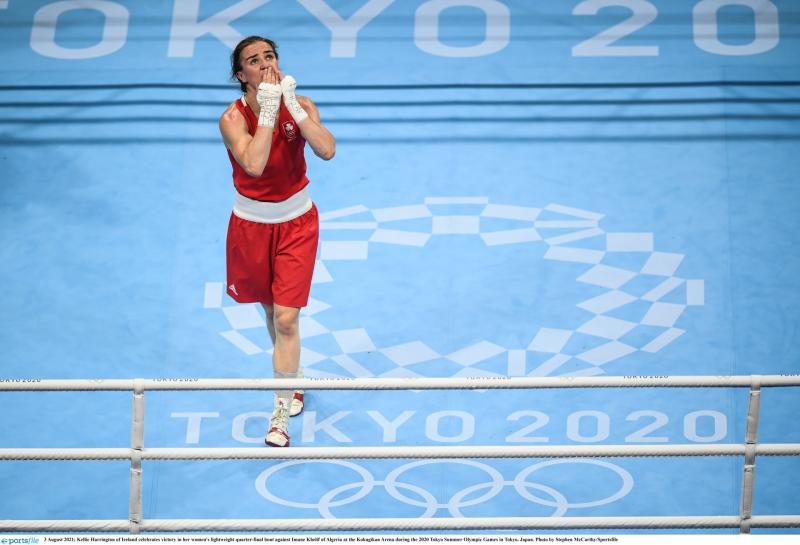 Boxer Kellie Harrington put in a great morning’s work in Tokyo this morning against a tricky opponent in Imane Khelif of Algeria, to win by unanimous decision and guarantee at least a bronze medal.

Despite a good opening minute from Khelif, Harrington got the measure of her quickly and from the midway point of the opening round, dominated the remainder of proceedings. Her win sends her through to the semi-final on Thursday, and guarantees her a minimum of a bronze medal.

It was also a good morning for athletics as well, with both Andrew Coscoran (Men’s 1500m) and Leon Reid (Men’s 200m) both advancing from their heats to qualify for their respective semi-finals, with Reid’s semi-final taking place later today.

Boxer Aidan Walsh will receive his bronze medal at the medal ceremony in Tokyo later today.

Kellie Harrington is now guaranteed at least a bronze medal at the Tokyo 2020 Olympic Games as she put in a gritty performance this morning against Imane Khelif of Algeria in the Women’s Light (57-60kg) quarter final. Khelif had the edge in the opening minute of the first round, with her long rangy jabs and reach seeing her settle in quickly. Harrington quickly got the measure of her though and, by the end of the round, was given a 4-1 advantage going into the second by the judges.

A measured performance followed from the Dubliner, as she put the pressure back on Khelif throughout the second and third rounds, to take home the win by unanimous decision and secure her spot in the semi-finals where she will face Sudaporn Seesondee of Thailand on Thursday.

Speaking afterwards, Harrington said, “yeah, she was a very game opponent, very, very rangy. I was trying to slip inside, and found it hard enough to do so but I could hear John shouting ‘move your head, move your head’ and Zaur shouting ‘back hand, left hook, back hand’. That was working for me - it was the simple things that were working for me. It wasn’t a spectacular fight, but this is what champions do, champions just do enough when they need to win and that’s exactly what happened there today. I did enough to get the bout, I wasn’t going inside the pocket to be caught or anything. It was good, I enjoyed it.

“To be honest, I don’t feel pressure about medals or anything like that because at the end of the day, I’m just here to perform and give my best,” she continued. “That wasn’t my best today but again, it’s very hard when you’re up against a tricky opponent to get the best out of you. So yeah, medals are medals. If I hadn’t gotten one I’d have been very upset, but it wouldn’t have been the end of the day, because a medal doesn’t define me as a person. I am more than just a boxer. I am a person and a human being and I have a loving family and a great community and I have a fantastic job so!”

“Our team has performed exceptionally well -  all seven athletes. You can see the preparation that has been done, the work that the support team has done, and the coaches. It’s been a hugely challenging tournament but the performances have been top notch. There’s a couple of close decisions that we didn’t get but you’re going home with two medals, when seven qualified. There’s huge potential within this squad still and it’s great to be a part of it.”

The Individual Show Jumping qualifiers will get under way from 11am (Irish time) today, with Darragh Kenny and VDL Cartello eighth out for Ireland, Bertram Allen and Pacino Amiro (ISH) 16th to take to the arena while Cian O’Connor and Kilkenny (ISH) will be 25th into the arena. There will be 73 individuals to jump, with 30 to qualify for tomorrow night’s final.