Impressive Louth ladies turn on the style in Goal fest 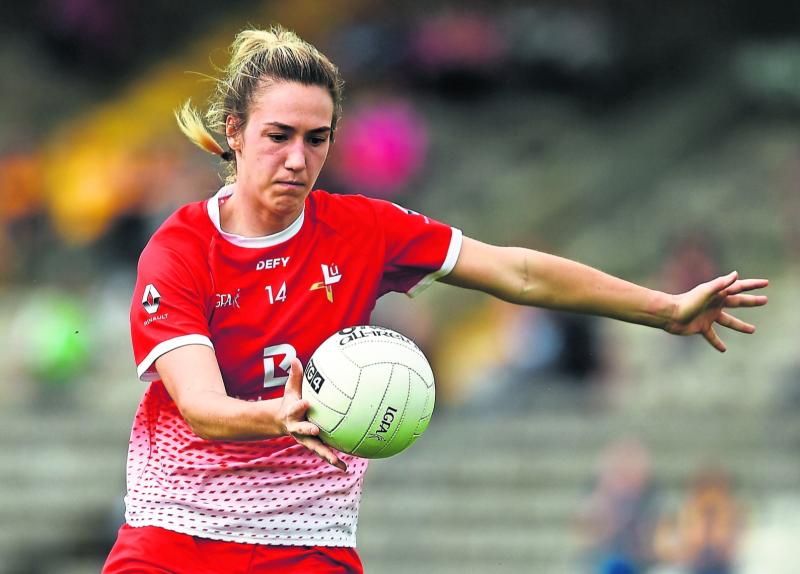 While the shooting boots may have been left at home a week earlier in Down, that was certainly not the case on Sunday as a free flowing and impressive Louth attack booked their place in the Intermediate Championship Quarter-Finals.

A late first half goal from Offaly meant that the Wee County only took a one-point lead into the break despite being by far the dominant side.

However rapid-fire goals in quick succession on two occasions in the second half built up a cushion that they never relinquished to set up a date with Laois in two weeks time.

Despite the early evening throw in time, the game was still played in sweltering hot conditions, the mercury reaching 24 degrees at one stage. You wouldn’t have guessed that from the fast start Offaly made.

Amy Gavan Mangan flew up the pitch, gliding past lines of defenders before taking on her shot from close range. Luckily Una Pearson was on hand to make the save and stop her side conceding a goal early for the second week running.

Mangan was fouled on her way to goal resulting in a close range free which Roisin Egan dispatched to open the scoring.

This ended up being a rare attack for the Faithful Girls, who were kept scoreless from the next 23 minutes. Their attacking philosophy relied heavily on moving the ball quickly, launching the ball into the corners for Grainne Egan and Mairead Daly.

But this tactic was proving costly as Wayne Freeman’s defence were winning every aerial ball that went in that region, resulting in turnover after turnover and leaving Offaly camped for large periods inside their own half.

Meanwhile Louth showed a patient streak to their game, they worked the ball up the pitch and were happy to stretch the defence to create space for a forward line that can do serious damage when on song.

To be fair Garry Daly’s troops worked hard to make sure chances were at a premium, staying tight to their markers and making sure they didn’t have the endless space that Louth has thrived on this year.

A nice diagonal ball six minutes in from Aine Breen to Lauren Boyle was the first time they cut the defence open, Boyle taking on her marker and winning a free which she duly tapped over to level the contest.

They were followed by points for Denise McKenna and Rebecca Carr, both setting up their shots following nice build up play coupled with speedy angled runs. By the first half water break Louth led by 0-3 to 0-1.

They were terrorising Offaly at this stage, winning all the key battles, and crucially turning the ball over again and again either from breaking balls following kick outs or on the rare occasion it did pass the middle sector loose passes lead to possession returning to the Girls in Red.

Laura Collins tagged two more points on in between a fine effort from Boyle, all of which occurred due to the Midlanders being intercepted, the gap widened to five points with 11 minutes of the half still to be played.

To their credit, the Girls in Green never gave in, the long ball into Mairead Daly finally paying off when she won possession on the endline and was fouled allowing Roisin Egan to tap over a simple free on 23 minutes to end a barren spell without a score.

Offaly started to get more of the ball in the remaining minutes of the half, with Pearson again called into action to stop the advances of Grainne Egan as the game entered additional time while two minutes earlier a close range free also came close to breaking the Louth rear guard.

They finally got that lifeline of a goal with the final attack of the half, a misplaced pass from Ceire Nolan was caught by Roisin Egan who combined with Roisin Ennis to tee it for Grainne Egan. She cushioned it home calmly leaving just a single point between the teams, 1-3 to 0-7 at half time.

Just like in the first half Offaly won the throw in and Mangan showed he pace as she soloed towards goal. A nice passage of play eventually saw the ball fall to Roisin Egan who got her only point of the day from play.

From here it was almost a case of déjà vu, this passage of play being their only score for the next 17 minutes, the chances again drying up for the Faithful County.

Ceire Nolan has been in fine form this year and continued this throughout the second half, acting as anchor between the defence and the attack through her impressive solo runs and pinpoint passes. She was also involved in many turnovers making her an invaluable asset to Louth.

Complacency up top was beginning to set in as a few relatively simple chances came and went for the Wee County, who only managed two points during this mini purple patch. But they did finally put the game to bed on 48 minutes, two goals in 60 seconds putting the contest beyond Offaly.

The resulting kick out was taken short and duly intercepted by Flood who this time turned provider for Rice, catching the keeper out of position and lobbing it over her head and into the net. 2-9 to 1-5, the game looking wrapped up by the water break.

Remarkably right after this stoppage Offaly went up the field through another solo run from Mangan, she played the ball to Grainne Egan and suddenly there was legs to their comeback as they bagged a goal. Those legs didn’t last long.

Right up the field went Louth through substitute Eimear Byrne, who chipped the ball over the defence and into the hands of

Flood who made no mistakes in bagging her second of the day.

A Fourth came four minutes later for Laura Collins as for a second time Louth put the contest beyond doubt. Attentions now turn to another knockout contest with Laois with a place in the AllIrelan Semi-finals on the line.