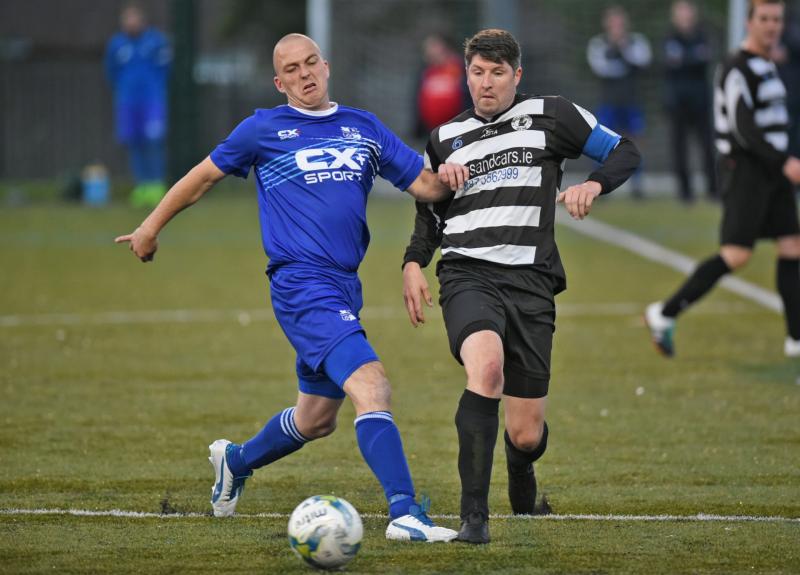 Muirhevnamor claimed bragging rights in this local derby but they were pushed all the way by an excellent Bay FC side who will they should have taken something from this tie.

Both the home side and Bay tested the respective keepers early in this one, the prolific William Opoku presented with a golden opportunity to break the deadlock but a fine save from David Cooney thwarted him.

It wasn't until the 25th minute that the game sprung into life, young Bay striker Kizito Ekwueme was hauled down in the box by Thomas McShane and the visitors were awarded a penalty. McShane lucky to remain on the pitch after pushing Ekwueme to the groud after the penalty was awarded. Alfonso Crespo made no mistake from the spot to hand bay the lead.

The goal spurred the home side into life and five minutes later they were level. A corner well cleared by the Bay defense was scuffed back towards goal by Darren Meenan, Ciaran McGuigan was the lucky recipient five yards out turning the ball into the net.

Vinny Smith came closest to adding to the goals, cutting in from the left and unleashing a fine strike that cannoned off the crossbar.

The 2nd half was only five minutes old when Ekwueme put Bay back in the lead, a fine ball by Melvin Onu played into Ekwueme who turned his man and finished superbly around the keeper into the far corner.

Again Muirhevnamor turned the screw by pressing Bay but couldn't make their chances count. With 65 mins gone Bay failed to clear their lines & Muirhevnamor were presented with a golden opportunity to equalise which Mickey O'Kane took.

With the game tied at 2-2 both sides moved the ball well looking for gaps but a controversal finish would be the decider, Tiernan Mulvenna looked to fall over his own feet just outside the box but the ref pointed to the spot.

Despite a fantastic save from keeper Kevin Mullen, the taker Marc Luke Griffin buried home the rebound to give the home team the lead for the first time in the tie.

Bay pushed for a equaliser in the substantial injury time and Ekwueme appeared to be played through by sub David Boyle only to be pulled back on his way to goal. No red card was produced and the resulting free kick came to nothing as Muirhevnamor FC claimed the derby bragging rights and crucially all three points.