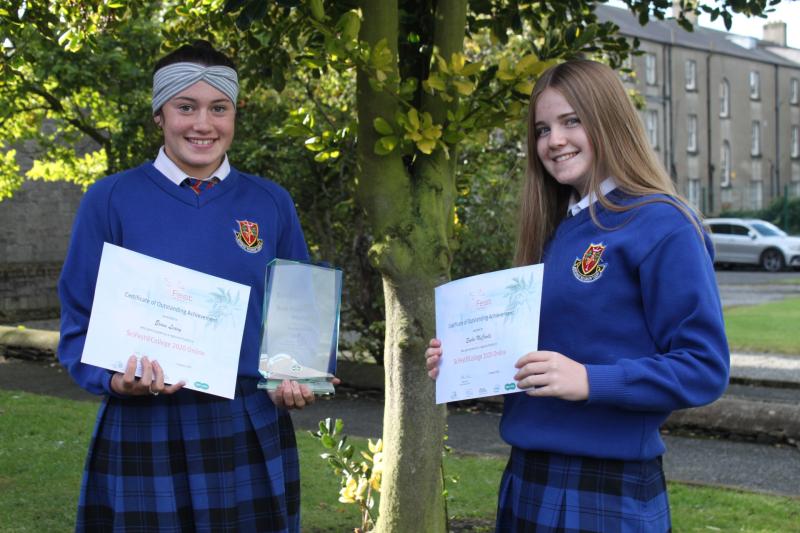 Erinn Leavy and Sophie McArdle with their award

The Grand Award was claimed by Erinn Leavy (15) and Sophie McArdle (15), third-year students from St Vincent’s Secondary School in Dundalk for their project, An Analysis of Physiological and Running Metrics in 3km Cross Country Running in Comparison to Track and Treadmill. The girls set out to investigate if cross country running was better preparation for marathons than track or treadmill training.

GYSTB is organised by The Hong Kong Federation of Youth Groups and was broadcasted live globally on 20 June. The competition attracted 133 project entries from 26 countries or regions all competing for prizes.

Speaking about their award, Dundalk student Erinn Leavy said: "Sophie and I are absolutely over the moon to receive an overall Bronze Grand Award. It is such a great honour to get to compete on a global stage against people from all over the world.

"This is a fantastic reward for our hard work and it is great to see our research acknowledged by international experts.

It is also a great testament to the essential support and encouragement given to us by our families, our teacher Mr White and all the staff of St Vincent’s Secondary School. We are also grateful to SciFest who give us the opportunity to compete on the international stage and achieve this goal.”

Sheila Porter, SciFest Founder and CEO commented: “We are all immensely proud of all the SciFest students who represented Ireland at the Hong Kong Global Youth Science and Technology Bowl this year.

Their great success in this prestigious international competition is testament, not only their ingenuity, commitment and hard work, but to the standard of Irish STEM education.

"We are delighted that the students have had the opportunity to bring their projects to an international audience. Well done to all of them on their awards and we wish them every success for the future.”

SciFest is the largest, most inclusive STEM event for second-level students in Ireland. SciFest is free to enter and open to anyone in Ireland, regardless of geographical location, background or ability.