The football prodigy is travelling to the Hope for Cancer Centre after the public rallied to raise over €100,000 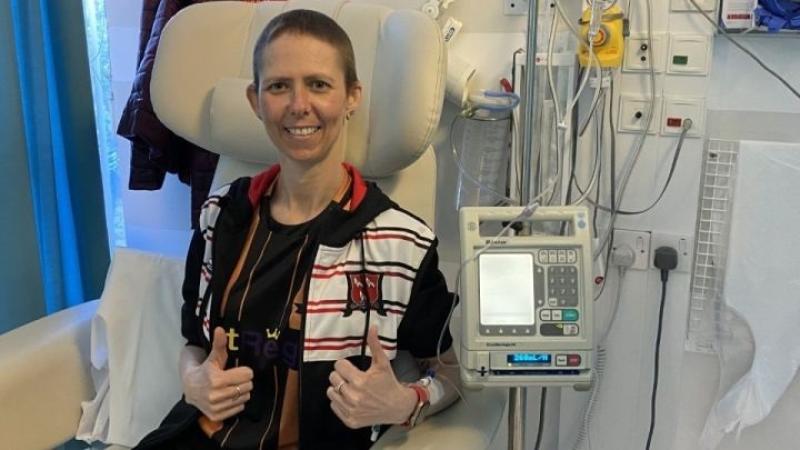 Former Dundalk FC football star Sonia Hoey is in good spirits as she prepares to head off to Mexico to receive treatment for her incurable cancer.

Sonia is set to leave for Tijuana, Mexico this Friday and is heading to the Hope for Cancer Centre to receive treatment to try and shrink her tumours.

According to her nephew, Daniel Hoey, Sonia has been in good spirits but that she was only given a 12-month diagnosis plays on her mind.

“Things are as good as you can get, it’s a hard time obviously. Sonia is in good spirits,” said Mr Hoey.

“It plays on someone’s mind too, so it was nice to be able to get her going now and she’s reacting well to her chemotherapy treatment… Her body reacted well to it so hopefully, we’ll see good signs going over to this non-toxic treatment over in Mexico.”
“Hopefully that there might help as well, prolong her life as much as we can get.”

“There’s a good bit of optimism and hope around the air. She’s looking forward to, hopefully, seeing a result.”

Mr Hoey says that their family are trying to keep the energy high for her, as well as keep her as destressed as possible.

“We’re trying to keep the energy positive around everyone and make sure that she’s in good spirits,” said Mr Hoey.

The 42-year-old was a sporting prodigy, having won a WFAI cup in 2005 with Dundalk, captaining the Dundalk IT football team alongside playing GAA with Dowdallshill before she went on to play with the Louth Senior GAA team.

Sonia battled off stage three cervical cancer in 2019, but in June 2020 she received news that the cancer had returned and that it had spread to her lungs.

Due to already receiving the maximum dose of radiation treatment, Sonia was given a 12-month diagnosis by her doctors and has since only been able to receive palliative care.

To try to combat the cancer, Sonia’s family researched potential treatments and came across the Hope for Cancer Centre in Mexico, where she would undergo non-toxic treatments like immune therapy to try and shrink her tumours.

The cost of a three-week programme was €80,000, with Sonia’s family setting up a GoFundMe page to try and raise part of the funds.

Mr Hoey says that they didn’t expect to get that kind of response, and that due to the extra money being raised, there is a potential for Sonia to return to the centre for additional treatment in the future.

“I’d say that this is the last push that we can get to raise money to send Sonia. If things go well, we’ll be able to send her a second time,” said Hoey.

“Then whatever she’s short, all the family will bunch up together to be able to send her again.”

Due to ongoing Covid-19 restrictions, only one member of Sonia’s family will be able to travel to Mexico with her while she undergoes three weeks of non-toxic treatment.

She’s set to travel with her sister Serena McArdle.

According to Mr Hoey, she will be in Mexico for around three and a half weeks to undergo treatment, with Sunday’s being her only day off.

The clinic in Mexico uses an integrative cancer protocol that combines both alternative and medical therapies proven to increase the patient’s success rates up to three times over the US national averages.

The family first decided on the Hope for Cancer Clinic after consulting with a former patient, Lyndsey Bennet from Longford, who had been through the process and received results.

The decision was also made due to many of the non-toxic treatments being unavailable in Europe.

Mr Hoey also said that the family have plans to raffle off signed jerseys to help raise more money, with items like a signed Manchester United jersey, of which Sonia was a fan.

Sonia’s fundraiser is still currently available, with further information available on either her GoFundMe page or her new Instagram account, SaveOurSonia.