Killing of Dundalk man to go before Supreme Court 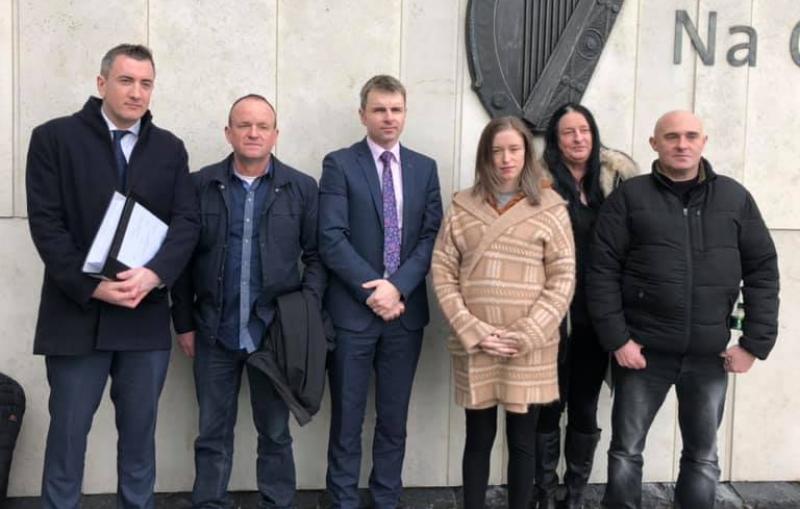 Solicitor Gavin Booth, Thomas Fox, Deputy Ruairí Ó Murchú and other members of the Ludlow family pictured in 2019 outside the Court of Appeal in Dublin

The family of Dundalk man, Seamus Ludlow, killed by Loyalists and members of the British Army, are back in court again this week with their 45-year campaign for justice coming before the Supreme Court on Thursday.

Sinn Féin TD Ruairí Ó Murchú said the case, taken on behalf of the family of Mr Ludlow, by the deceased man’s nephew, Thomas Fox, is the first of its kind before the Irish Supreme Court.

Deputy Ó Murchú said the case will be the first Article 2 of the European Convention on Human Rights to go as far as the Supreme Court.

He said: “The Ludlow family solicitor, Gavin Booth from Phoenix Law has said the same issue will also be heard in London two weeks later in the British Supreme Court with the Hooded Men, and the family of Jean Smyth, murdered as she sat in a car in Belfast in 1972, taking a case on the same article of the European Convention on Human Rights.

“These issues will have a direct effect on all legacy cases both north and south and it is hoped they will bring an end to the delays in the court processes for families.

“The Ludlow family will view the case online.

“This comes against a backdrop of the recent moves by Boris Johnson’s government to grant an amnesty for British Crown forces so they don’t have to admit their role in their dirty war.

“Against that, we have had the tenacity and courage of the families who continue to seek the truth”.

Mr Fox is taking proceedings on behalf of the family against the Minister for Justice and State.

These are aimed to compel commissions of inquiry to examine failures in the Garda investigation and to look into what documents might have been created by the State authorities in respect of the killing of Mr Ludlow.