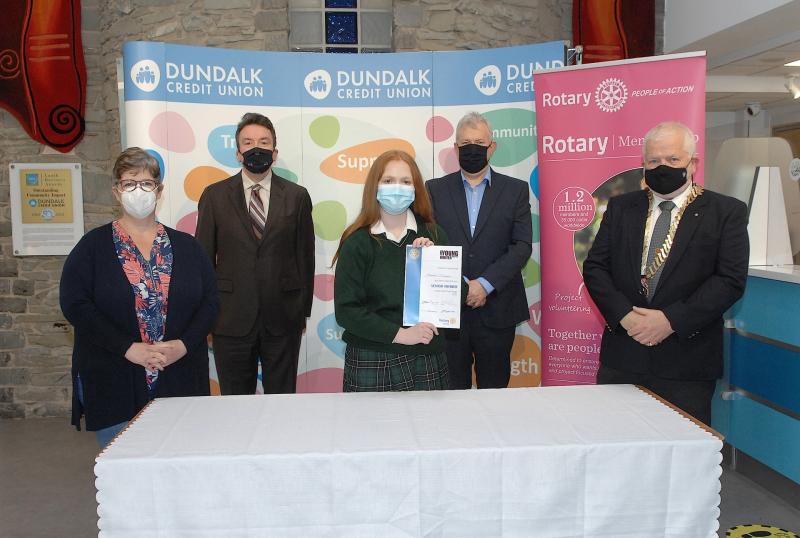 The past 14 months have been a challenging time for secondary school pupils with many of the curricular activities and “add on” events in the way of competitions having to go by the wayside due to Covid restrictions.

The Rotary Club in Dundalk, supported by Dundalk Credit Union, have been running its youth leadership competition for over 20 years with winners from all over the island of Ireland travelling to take part in debates in the European Parliament in Strasbourg.

Like everything else, this competition that is run in an interview format could not proceed as usual last autumn.

When looking for a replacement competition for this year that did not involve face to face meetings the Dundalk club decided to introduce the Rotary Young Writers Competition.

The aim of the writing competition is to give young people the opportunity to showcase their written talent through fiction, non-fiction or a poem.

The theme for this year’s Young Writer competition is “My Happiest Day”.

Our young people were asked to produce a piece of fiction or non-fiction/story or poem, relating to this theme. It was to be up to 550 words long or one side of an A4 sheet.

As it was the first year of the clubs involvement, it was decided to run in the senior section, and five of the local secondary schools took part.

Of the many entries which were of a very high standard, the list was whittled down to 7 entries to go forward to the final.
The finalists were Tara Suresh and Breanna Savage from the Bush, Michelle Aghbolade and Callum Clarke from the Marist,
Victory Joshua and Hanna Dowdall from St. Vincents, and Sarah Dunne from St Louis secondary school.

The final stories and poems were judged by Billy Doyle on behalf of Dundalk Credit Union, Sean O Hanrahan on behalf of Rotary and the judges were chaired by none other than Pat Moylan Chairperson of the Irish Arts Council.

After much deliberation, the winner was announced as Sarah Dunne from st Louis school, and the runners up were Callum Clarke from the Marist and Breanna Savage from the Bush.

Due to Level 5 restrictions, prizes for the first two only were awarded to the winners at a socially distanced presentation in the Credit Union last Wednesday and were awarded by the CEO Billy Doyle. Certificates and Book vouchers will be sent to all finalists.

Billy Doyle thanked all who participated and expressed the Credit Unions pleasure in continuing to support this very worthwhile competition.

Commenting on the outcome, the local president of the Rotary Club Stephen Gunne expressed his thanks to everyone that helped make the first foray into the competition such a success and hopefully it can expand into the other categories next year.

Sarah Dunne’s entry will progress to the National Final which will take place in May.