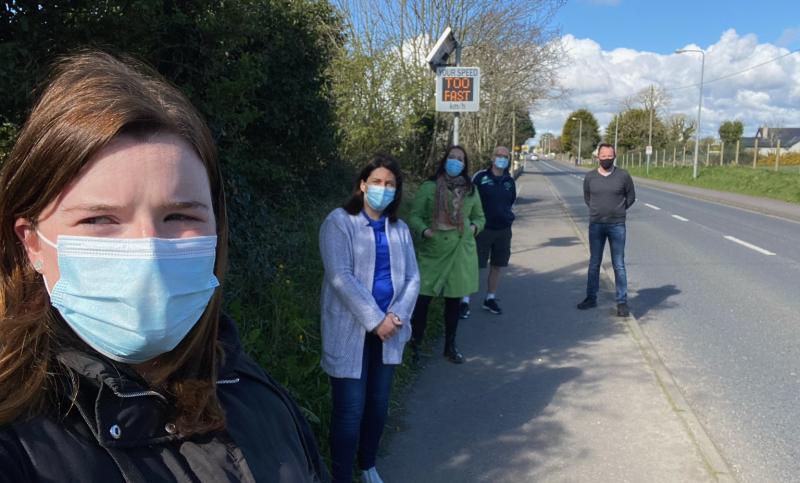 Hundreds of motorists are speeding on a stretch of road which passes a school and community centre every hour putting people’s lives in danger.

As many as 242 motorists speed through Lordship on average every hour with only a quarter of drivers adhering to the speed limit, shocking statistics have revealed.

The research on the speed of vehicles on the road through Lordship was carried out following the death of popular local man Paul Sheelan who was tragically killed in a car crash in the area recently.

Local councillor Andrea McKevitt has called on Louth County Council to put measures in place to slow down traffic and prevent another family suffering the heart-breaking loss of a loved-one on the road.

“There are 242 vehicles speeding through Lordship on average every hour past our school, our community centre, chapel, graveyard, homes, respite centre and businesses”, she said.

“Safety measures being put in place on this stretch of road will not bring those we have lost back but will prevent similar situations, so others don’t have to experience such loss and pain.”

The Fianna Fáil Councillor was speaking at the Dundalk Municipal District monthly meeting last week where she tabled a motion calling on the local authority to install additional safety ramps and a continuous white line along the Lordship straight to allow for a safer stretch of road for all users.

She called on the continuous white line to be put on the entire extent of the road, from Annaloughan to the Old Hall Road in Lordship.

Cllr McKevitt, speaking at the meeting held via zoom last Tuesday, said: “Concerns have been raised by residents in the locality, road users and parents of children in the school.

“The only viable long-term solution to make this stretch of road safer is additional safety ramps to slow the traffic down.

“There have been numerous traffic accidents on this road and most recently one that tragically resulted in a fatality.

“On foot of this accident a group has conducted research that shows on average 483 vehicles pass through Lordship in an hour, of those 483 vehicles only 25% of them adhere to the speed limit or travel less than the limit.

“This means 242 vehicles speed through Lordship on average every hour past our school, our community centre, chapel, graveyard, homes, respite centre and businesses. This is just crazy.

“The ramps at the school prove effective, however once people pass these the speed is picked up again and disregard given to road users, especially those walking.

“The request for a continuous white line would prohibit vehicles passing out one another on this stretch of road and would be a very welcomed measure by residents.

“However, ultimately we need safety ramps to be installed to make the road safer for all its users to slow the traffic down.

“Many parents don’t bring their children for walks or cycles along the wonderful footpath facility simply because it is too dangerous.

“Another option that could be explored is the extension of the 60km per hour limit, but this on its own is not enough.

“I ask how many more lives must be lost on our roads for us to do something.

“These simple but effective safety measures will not bring those we have lost back but will prevent similar situations, so others don’t have to experience such loss and pain.”

St Patrick's GFC man and father-of-one Paul Sheelan, 53, from Mountbagnal, Riverstown died last month following a traffic accident not far from his home on the Dundalk to Carlingford Road at Loughanmore.

Cllr McKevitt, in her motion, called on Louth County Council to “install ramps and other such safety measures” at Bellurgan National School like those at the other primary schools in the parish, Rampark NS and Dulargy NS.

The peninsula native stated: “There are three facilities in the vicinity bringing huge volumes of traffic to the area, and the only way that traffic can be slowed down is if ramps are installed strategically along this stretch of road.

“Children are our most vulnerable road users, and we must do more to protect their interests and provide a safe route for them to be able to walk or cycle to school, and at present it just is not safe.

‘’Many residents and concerned parents along with members of Bellurgan NS, have contacted me relaying their fears for this road.

“The only long-term viable solution to slow traffic down is to install safety ramps.

“I hope that Louth County Council will be supportive in any applications put forward requesting funding and I will be encouraging the interested parties to get applications in for the sources of funding available.’’

Cllr Watters also tabled a motion for the local authority to carry out a road safety audit at Bellurgan National School and Bellurgan United FC and introduce appropriate traffic calming measures as a “matter of urgency”, such as an island in the middle of the road to narrow the road to ensure drivers slow down.

The Louth County Council said it is not their policy to install ramps, especially on regional roads, as they cause difficulties for vehicles such as ambulances and fire engines and prefer to use other traffic camping measures such as gateways that narrow the width of the road to slow vehicles.