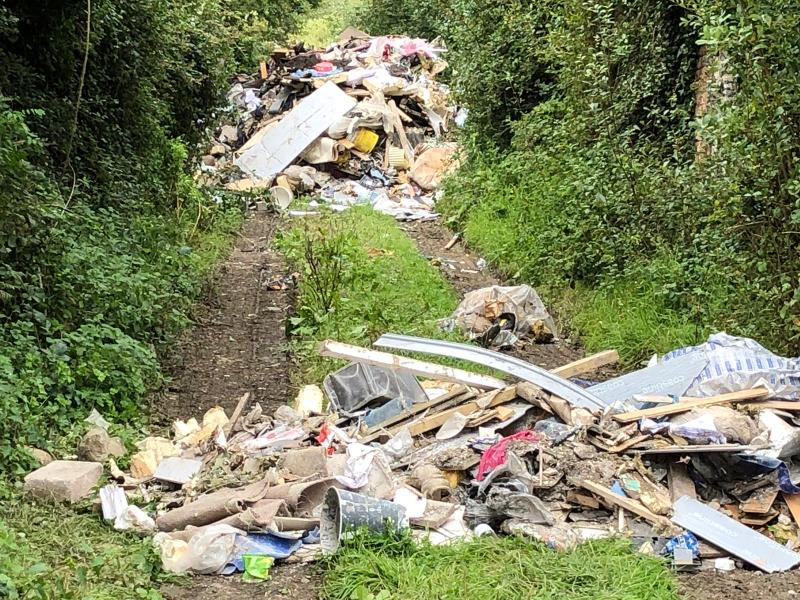 Calls have been made for the local authority to tackle the surge in illegal dumping in our communities since the pandemic.

Councillors highlighted the scourge of people dumping their rubbish on streets and alleyways around Dundalk and Louth.

They said that people in communities are carrying out clean ups in their areas, collecting the dumped litter, but within weeks rubbish dumped illegally has piled up again in public spaces.

“In the Faughart area, less than two weeks after a massive spring clean was carried out by households in the area, the litter warden on three sperate occasions had to come out to the area to address issues of illegal dumping.

“It is one of many areas that are having this problem and we don’t seem to be getting anywhere with addressing this, it doesn’t seem to be improving on the ground.

“I would urge that something more be done because what we are doing so far isn’t working.

“We are coming back into the summer season and seeing restrictions start to ease and will see an even bigger surge in illegal dumping in the coming months.

“There is also illegal dumping in the Faughart graveyard.”

“The litter warden has been here on numerous occasions to Castleross so I am hoping this can be marked as a blackspot to be checked on a regular basis because it is happening again and again” he told the local authority at the meeting held online last Tuesday.

“The site is somewhat secured as residents have gated off the back alleys, but people are still coming along and just throwing their rubbish over the gate and a rodent issue is going to arise if it persists.

“Also, the litter wardens have cleared a lot of rubbish in Marian Park, but there is the issue of overgrown trees and shrubbery in the alleyways which is encouraging dumping.”

Cllr Liam Reilly added: “There is an issue with fly tipping and the increase in litter has been evident since the pandemic, especially in 2021.

“We did a Spring clean in Dromiskin two weeks ago and collected 60 bags of rubbish and unfortunately there is just as much litter on the roads again now.”

Louth County Council said that fly tipping is a big problem, but they are “doing their best to deal with it as it arises”.

“There is fly tipping going on everywhere with tons and tons of rubbish being dumped and we are dealing with it as best we can”, the local authority’s Mark Johnston said.

“We would like the laws to be more in our favour to put up CCTV cameras so we could identify the people dumping like we did in the past.

“But currently we are prohibited from putting cameras up unfortunately.

“That law might change later this year, we believe, so we might be back in a position to start getting cameras up in different places to deal with the fly tipping like we did before.

“We are collecting 10% extra tonnage of illegal dumped rubbish.

“We are dealing with it as best we can, the litter wardens are trying to identify the people doing it through letters or other forms of identification that they can find in the rubbish and we take those people to court and they are fined.”

He said they are currently working on an anti-dumping initiative and have €150,000 revenue to promote anti-littering, to do clean ups and to do mattress and furniture collections.