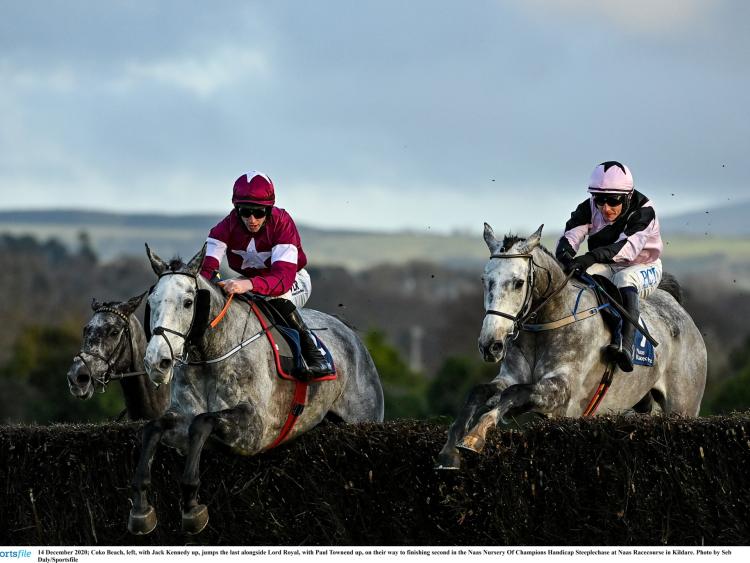 The Irish Grand National (5.00) is the big race on the card on Easter Monday at Fairyhouse with Latest Exhibition likely to go off favourite for trainer Paul Nolan. He has plenty of class but will have to shoulder top weight to win.

I was always a fan of THE BIG DOG for this race but he was withdrawn early on Monday due to the drying ground. He is a bit of a mudlark and would have seen JJ Codd cutting to his lowest weight in almost 20 years to take the ride. With him out, I'm backing two in this year's renewal, the first being COKO BEACH (14/1).

COKO BEACH was a good winner of the Thyestes Chase at Gowran back in January, beating stablemate Run Wild Fred. He is eight pounds worse off with that rival in the handicap but has a seven-pound claimer, and a very good one, in Jordan Gainford to take some of the weight off. He followed that success with another run over three miles when he saw off Esponito Bello and Forza Milan comfortably. He is getting better with every run and could well have the class to take this race out. Coko Beach would have been a leading fancy in several races at last month's Cheltenham Festival but it was decided to keep him at home to tackle this race. This is a big pot but resisting the lure of Cheltenham may well be a tip in itself from connections.

If you're looking for one at a bigger price in the market, OFF YOU GO (22/1) is interesting now upped in trip. He won a decent race at Leopardstown in February when he beat Minella Times who runs in the Aintree Grand National next week. That was over 2M 5F so this is a stiffer test but his new trainer Robbie Burns clearly thinks he'll stay and there's plenty in his pedigree to suggest likewise. Mark Walsh on board is also a strong jockey booking in the JP McManus colours.

Also on the card at Fairyhouse, I'm interested in STORMY IRELAND (5/1) who has been sent back to Willie Mullins' yard after a spell with Paul Nicholls. She was just short of top brass for Willie first time round but may not need to be spectacular to take out the 3.50 race here. Yes, The Bosses Oscar has some good form in the book and ran well to be second in the Pertemps at Cheltenham but the selection comes in fresh. With Willie Mullins in 2019 and 2020, Stormy Ireland beat the likes of Elfile, Franco De Port and Black Tears, this year's Cheltenham Mare's Hurdle winner. She wasn't a mug for Paul Nicholls and it's not beyond the realms of possibility that she remains with plenty of potential now back in Ireland.