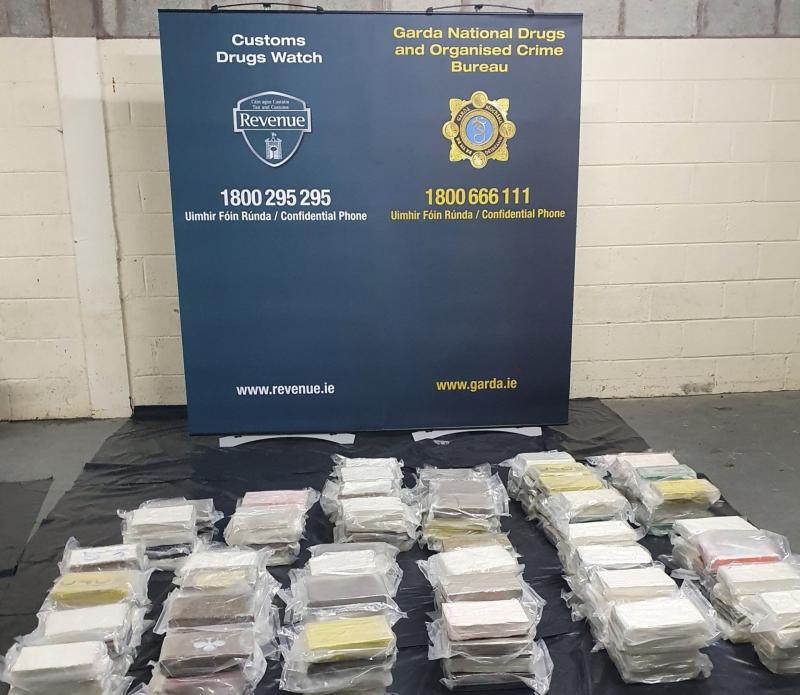 A total of 72kgs of suspected cocaine, with an estimated street value of €12.04 million,  was seized

OVER €12 million worth of suspected cocaine has been seized by gardai this Thursday.

An Garda Síochána through the Garda National Drugs and Organised Crime Bureau (GNDOCB) and Revenue’s Customs Service, participated in a joint operation which led to the seizure.

During the course of the operation, approximately 172kgs of suspected cocaine, with an estimated street value of €12.04 million, was seized in Ringaskiddy Port in County Cork. The drugs were discovered following an intensive search of containers that arrived on a vessel from Central America.

Speaking today, Assistant Commissioner John O’Driscoll who is head of Organised and Serious Crime within the Garda Síochána, said:

"A joint operation undertaken today involving participation by An Garda Síochána, through the Garda National Drugs and Organised Crime Bureau and the Revenue Customs Service, that resulted in the seizure of a  substance believed to be cocaine with an estimated street sale value of 12.04 million euro, demonstrates the potential of collaborative working relationships involving partner agencies, in tackling importation of controlled drugs that harm our communities.

The Garda Síochána will continue to work with others at a national and international level in targeting the importation and supply of illicit drugs and the organised crime gangs that benefit from such activity”.

"Combating the smuggling of controlled drugs such as cocaine into this jurisdiction, in collaboration with An Garda Síochána is a priority for Revenue. Today, Revenue’s Customs Service deployed the full suite of our specialist search resources to control this vessel from Central America including our Container X-Ray Scanner, Drug Dog Detection Teams, Container Inspection Teams and Deep Rummage Officers from our Customs National Maritime Service. Today’s seizure of cocaine will have a significant impact on organised crime and demonstrates the hard work that is undertaken every day by Revenue’s Customs Service and An Garda Síochána in confronting this threat”.