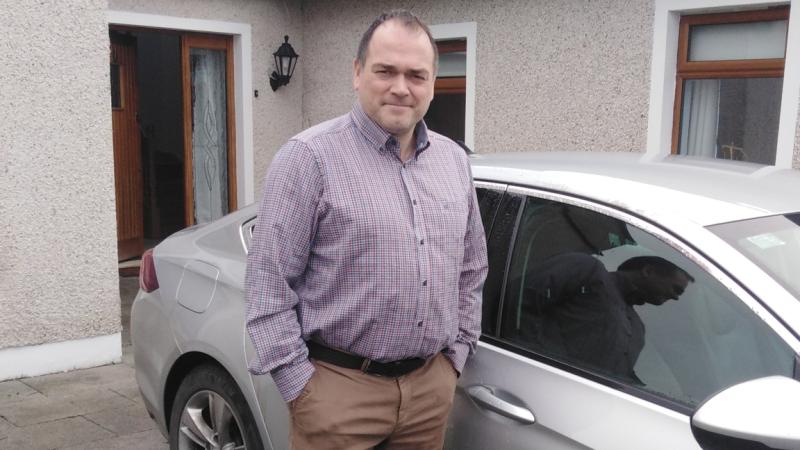 Austin Traynor as he prepares to head off to work in Dublin due to not having a strong enough internet connection to work from home.

The past year has seen the nation adapt to new ways of living, from learning to social distance in public and reducing our interactions with friends and family, to learning to utilise technology as we teach our kids and work from the comfort of our own homes.

A strong internet connection in this new world has become a vital commodity and access to it a necessity to function in many parts of our lives, be it shopping online or setting up a home office.

Unfortunately for one Louth man, the ability to work from home and keep unnecessary journeys from his house to a minimum has been taken away from him as a result of poor internet in his area.

Austin Traynor, a keys accounts manager living in the Whitemill area of Faughart has been forced to make regular 90-minute trips from his home to Dublin due to not having confidence in his internet connection.

“A lot of my work which previously would have had me helping clients on site, they are now done though calls and it can just be very hit and miss in relation to how successful a call will be” he claimed.

“If it is a particularly important call, I am forced to drive up to the office in Dublin just to make sure there won’t be any issues as I cannot take the chance of something going wrong working from home which is very frustrating.”

Mr Traynor works for Iron Mountain, an information management company based in Damastown which specialises in providing tailored solutions to firms in need of help with backing up data, storage management and recovery of lost files.

As someone who regularly liaises with clients about their online activities, the irony of having such big issues with his own connection is not lost on him.

“It is ironic when I am on calls and discussing new innovative ways to store their info on a cloud or other electronic storages for data and in the middle of a call the line drops so it can be seen as both ironic and annoying at the same time.”

During the last year, our mental health has become highlighted a lot more as we come to terms with more prolonged periods of isolation, and while working from home creates its own stresses, it is the constant worry of his devices not working coupled with a need to make regular commutes that has left Traynor anxious.

“When you are working at home and that call starts to freeze or drop off, you end up trying everything you can to fix it, be it limiting the amount of bandwidth you are using or whatever. It is certainly stressful worrying are your basic communications going to work on it?”

“When you add the extra strain of having to commute on top of that it is making an already difficult situation a lot more challenging than it should be.”

The father of three has tried numerous ways to improve the internet situation in his house but with his children currently home schooling and both parents trying their best to work from home, his innovations have left him in the same scenario of not having the bandwidth to keep everyone happy.

“We have looked at alternatives, the likes of Imagine and others but they have no capacity so there is no option to use these at the moment, we must be six or eight months on a waiting list with other providers, but they just don’t seem to have the bandwidth to add new clients in this particular area.”

Having seen promises from government after government in relation to the rollout of broadband go unanswered and with no signs of improvement in the area, Traynor has called on those in power to lobby more while also stating that what they are looking for isn’t anything special to be asking for.

“Over the last 12 months it would be nice to see the government put pressure on the contractors to speed up what they are doing, now is when people need the internet more so than ever before, so are they doing enough? At the moment the answer would be no.”

“It doesn’t have to be super-fast but just be up to a level to allow people to get on with their daily lives, it’s something like electricity that should just be there and working all the time, it shouldn’t be on your mind daily which is unfortunately what we are dealing with at the moment.”