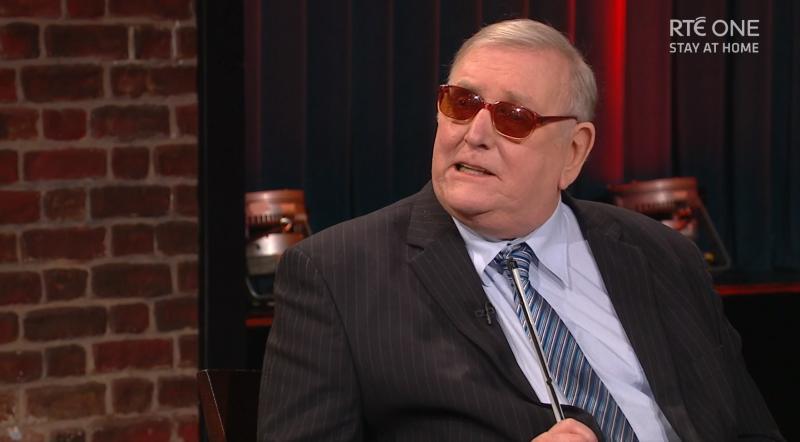 Eric, who is from Dundalk, has won €20,000 for his charity of choice – Irish sight loss charity Fighting Blindness.

Eric and his four fellow winners were announced live by Ryan Tubridy on the Late Late Show on Friday 29 January.

AXA Ireland announced the competition last July and asked people across the country to nominate their local hero.

They wanted to celebrate the unsung heroes that go above and beyond to help others and their communities all over Ireland.

Eric was nominated for his outstanding dedication to Fighting Blindness, over the past 15 years he has raised over €155,000 through fundraising activities.

Eric was diagnosed with a degenerative eye condition called retinitis pigmentosa (RP) in his forties and has no eyesight left as a result.

His friend Peter, who is sadly now deceased, introduced Eric to Fighting Blindness and fundraising.

Since then, he has completed treks, tandem cycles, Easter egg hunts, church gate collections and more to raise money.

Thrilled by both the nomination and win, Eric said: “I’m delighted to have won, it’s hard to believe.

"I had to cancel all my fundraising plans last year so it’s really fantastic to be able to give Fighting Blindness a cheque for €20,000.

“I’m so grateful to all my family and friends who have helped me fundraise over the years – I couldn’t have done any of it without them.

"Every time I asked something of them, they did it for me.

"It’s a brilliant community we have here.

"This is as much their prize as it is mine.”

Kevin Whelan, CEO of Fighting Blindness said: “Eric Beggs is an outstanding volunteer and an inspiration.

"We nominated him as an AXA Community Hero as we believe it is the perfect way to celebrate his illustrious fundraising career and thank him for his hard work and dedication.

"He is a deserving winner to say the very least.

"The money he has raised over the years has helped us to continue our mission to find a cure for blindness.

“We would like to thank AXA Ireland for their generosity and the opportunity to celebrate all of Eric’s fundraising success.”

In 2019 Eric was also named one of Ireland’s top volunteers when he won the top prize in the Health & Disability category at the Volunteer Ireland Awards.

If you wish to donate to Fighting Blindness you can do so online at fightingblindness.ie.