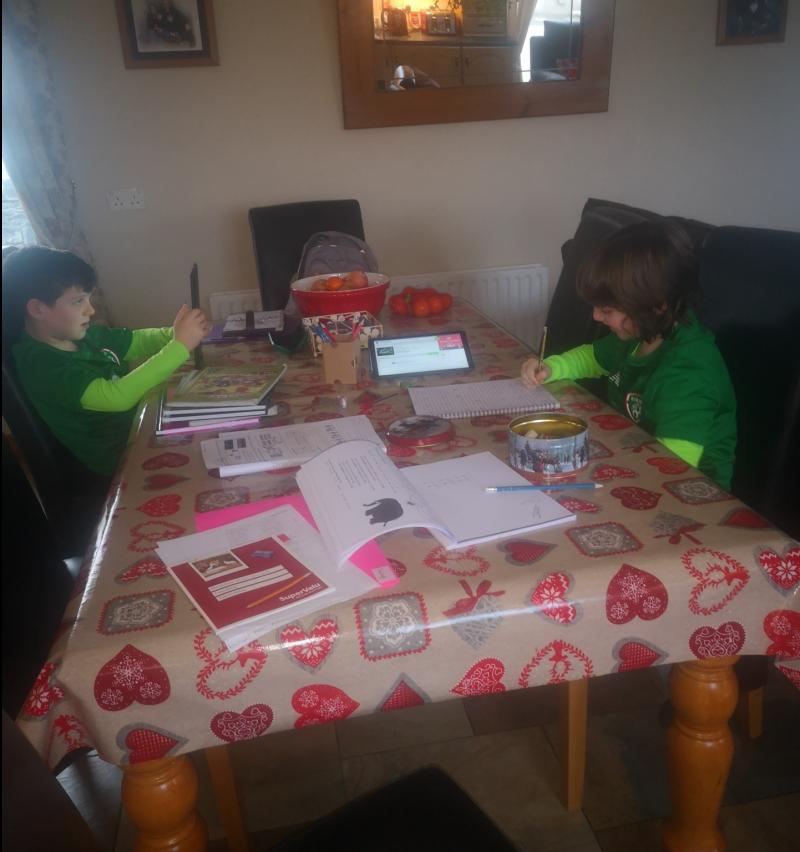 While the internet has slowly but surely become a more constant thread of our everyday lives, the lockdown has seen it turn from being an added comfort to a necessity as much so as running water and electricity.

The pandemic has seen a significant rise in the need for a strong internet connection as people begin turning their back rooms into home offices and their kitchens into makeshift classrooms as we try to keep some normality in our lives.

Geraldine Marron is one of thousands of parents facing into another period of home schooling her children, something that has become impossible to provide properly as she battles daily with the poor internet connection in her home on the main Dundalk to Carrickmacross road.

“Last Monday’s work still hasn’t come in” she claims, “so that leaves me having to email the teacher, so they know we aren’t being lazy as it just won’t download for us which makes it much harder for us to try and home school the children.”

One of her children will be attending secondary school in September and Marron is already worried that he will not be able to get the most out of his education with the connection at its current output which is at most just under a megabyte.

"The first thing he is going to need is a laptop. Even if school is on properly, he will still need one to research his homework, get an essay or project sorted. He’ll be going to school in September and he won’t be able to do it”.

“We’ve tried a number of different providers like Eir, Sky, and Telecom and we even tested out Three recently, but again the modem they provided for us could only get 0.6 megabytes or so. We are running out of options.”

In 2019 it was announced that the Government was to invest €33 million to deliver high-speed broadband to Louth, with 8,243 homes across the county to benefit from the scheme.

Nine Broadband Points were announced for Louth with six of those put in place by October of 2020 and the rest due to arrive in the year ahead but while this has created a nearby access point for Wi-Fi to many communities it is of no good to Marron who has gotten little answers to her queries.

“I got onto the National Broadband Plan and they just replied to me that we are in the intervention area and it would be here in due course but we could have to wait up to seven years. I live close to two of those hubs announced, but it hasn’t helped our connection in any way."

"Are we supposed to sit outside a clubhouse or football pitch all day long so my child can get an education, or can we get properly connected to the internet?”

The worried parent has been left relying on the help of other households along with forking out more money every month for mobile data as she looks to do everything in her power to keep her children educated.

“I pay €50 a month and get under a megabyte of coverage coming into my home which is insane as up the road they can get up to 100 easily and that leads to us having to use their homes which isn’t feasible right now.”

“One of our lads gets €20 credit a month and he has to switch over to the mobile internet on his phone just so he can get things done, but it is gone very quick on him and as a result he’s back to square one.”

Local Fine Gael Councillor John Reilly has been inundated with similar problems from parents, and along with Senator John McGahon’s office, has been engaged in extensive research and a project looking to highlight and fix the issues involving internet connections in the county.

Reilly was sympathetic towards the cause, believing it unfair that some families have been forced to bypass current government guidelines all in the name of providing a good education for their kids.

“The point of the matter is your asking parents either to let their children’s homework suffer or they meet up with their families elsewhere which we are told not to do, all over not having a proper broadband connection. They don’t want their children falling behind.”

“It leaves children affected by the geography of the area they live in, discriminated because of the postcode you are in and the poor infrastructure in that area which is very frustrating.”

Sinn Fein Councillor Antóin Watters also raised concerns about what he calls the “sporadic” and “hit or miss” broadband in North Louth.

Cllr Watters explained “Over the last number of weeks I have received numerous calls from families in the Edentubber area whose children are struggling while learning from home.

“They have told me of the anxiety experienced by these children resulting from the broadband supply which is hindering them from learning online and completing their coursework”.

According to Cllr Watters, “Some of the houses in the area receive less than 1MB of broadband signal despite paying for a much higher bundle every month. In this day and age this is simply not good enough and the people in this area have been left behind by the Government’s failure to provide adequate broadband.

“We are living in unprecedented times and families are trying to overcome the daily struggles this virus poses and try to adhere to Public Health guidelines; working from home and learning from home. The health situation is compounded because of the lack of broadband service. One thing that this virus has done is to highlight the inadequacies of the current government in providing services especially in the rural areas like North Louth.

“People should have the option of working at home and our children should be able to get their education but because of the woeful lack of services in this area, some are forced to travel unnecessarily to work and the children are being left behind in their education while families are incurring huge costs for devices to access school teaching materials but without much success.”

Cllr Watters criticised the Government’s National Broadband Plan saying it “is currently below its targets and the likelihood of this area being connected is well down the line. We need to get Remote Broadband Hubs installed in these rural areas as this is the only chance of getting the broadband they urgently need. The Government has funding for remote hubs and I will be writing to Minister Heather Humphreys, Minister for Rural and Community Development, demanding that she include this area in this year’s plan.”