at the Aviva Stadium 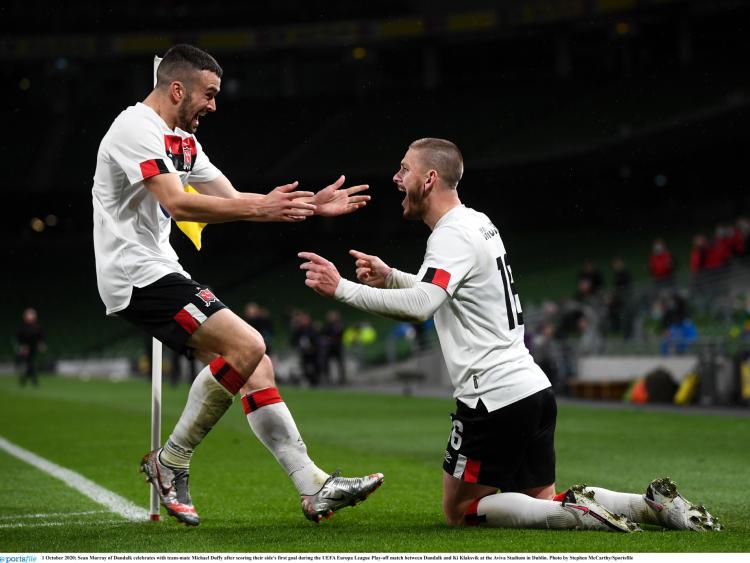 Dundalk FC have once again reached the promised land of the Europa League group stages after beating KI Klakisvik of the Faroe Islands in the play-off round at the Aviva Stadium.

Goals either side of half-time from man-of-the-match Seán Murray and Daniel Cleary had put Dundalk in cruise-control, but KI pulled one back through Ole Erik Midtskogen. The Lilywhites weren’t going to be denied, however, and Daniel Kelly came off the bench to seal Filippo Giovagnoli’s side a place in the lucrative group stage draw on Friday afternoon.

Dundalk made two changes from the previous week’s dramatic penalty shoot-out win in Moldova, with Stefan Colovic and Patrick McEleney both being drafted in for Seán Gannon and Chris Shields, who both missed out through their respective injuries and suspensions.

The Lilywhites – knowing that a win would yield at least €3 million for the club – started brightly and had chances in the early stages. First, Colovic broke down the right before whipping in a decent cross, but Patrick Hoban just couldn’t direct his header on target.

McEleney – one four players to start who also featured in Dundalk’s run to the group stages four years ago – tried his luck from distance moments later, curling a shot from approximately 25 yards that had to be pushed out by visiting goalkeeper Kristian Joensen.

KI began to settle after that and were beginning to make life difficult for Dundalk, but Giovagnoli’s side were doing extremely well to utilise the bigger playing surface at the Aviva.

Michael Duffy saw his set-piece from the left diverted out for a corner by KI midfielder Jakup Andreason and the ball, in Dundalk’s case, trickled agonisingly wide of Joensen’s far post.

Dundalk took a more than deserved lead on 33 minutes when Seán Hoare sent in a beautiful delivery for Hoban, who headed into the path of Murray, and he nodded home after some hesitance from Heini Vatnsdal and ‘keeper Joensen, not that Dundalk were complaining.
Murray, who has been phenomenal throughout this Europa League qualifying campaign, unleashed a long-range shot not long after that, but this time, his effort was well wide.

As the second half started, the rain began to pour down on the Lansdowne Road venue and so too on KI’s dreams of becoming the first ever Faroese team to reach the Europa League group stages. That was because Dundalk doubled their advantage just three minutes after the restart after yet another mix-up between Vatnsdal and Joensen allowed Cleary to finish.
KI simply never gave up, though, and Gary Rogers had to be alert to push a shot from Patrik Johannesen around the post before Brian Gartland had to clear off the line moments later.

Boris Dosljak sliced his volley wide, but KI did get themselves back into the tie on 66 minutes when Joannes Bjartalid laid it off to Midtskogen, who set himself up for a shot before placing his effort into the bottom corner despite the slightest of touches from Rogers.

Mikkjal Thomassen’s brave side almost equalised 15 minutes from time when the dangerous-looking Bjartalid – Faroese player of the year – saw his effort saved by Rogers.

As they continued to press, KI were caught out in the 79th minute when the superb Murray won the ball in his own half before putting it on a plate for substitute Kelly, who finished brilliantly to complete for Dundalk and Giovagnoli, one of football’s most unlikely stories.