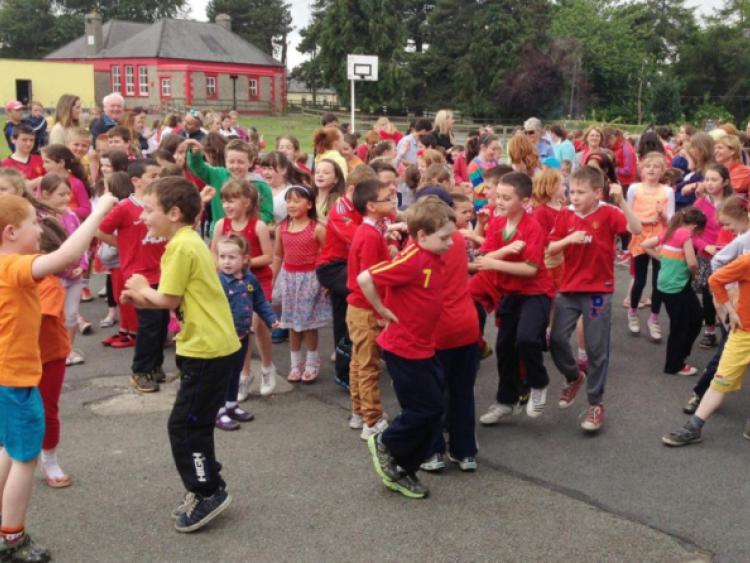 This was a real community effort. In particular he thanked Seamus McArdle and Dr Pamela Whitaker. Pamela oversaw the project from its inception and was responsible for the trees, plants and flowers chosen as well as many of the art and craft activities that accompanied the project. Without her it would never have happened. Seamus created three beautiful bespoke seats/benches as well as a unique Ogham/Milestone which forms the centrepiece of the garden. Mr. Mulligan reminded those present that this was a place of peace, contemplation and reflection – a getaway from the hustle and bustle of the playground.

Ms Keane O Hagan informed the large crowd of the garden’s connection with the school’s past. She highlighted the Dromiskin NS contribution, in 1937/38, to the Irish Folklore Commission collection. She and members of 6th class mentioned some of the ancient cures practised in Dromiskin many years ago and which deserved a mention on this day, the anniversary of St. John. Pamela explained the significance of the four fires dotted around the school grounds at the Biblical Garden, the newly named Wisdom Garden, the Outdoor Classroom and the Dreamtime Garden. They represented the four ancient Celtic festivals of Imbolc (Spring), Bealtaine (Summer), Lúnasa (Autumn) and Samhain (Winter). Welcoming pilgrims at each of these stations were parents (Imbolc), Dromiskin Tidy Towns (Bealtaine), pupils (Lúnasa) and teachers (Samhain). After the ritual of pilgrimage, wishes and chants the children entertained the adults with a fun “flash dance”.