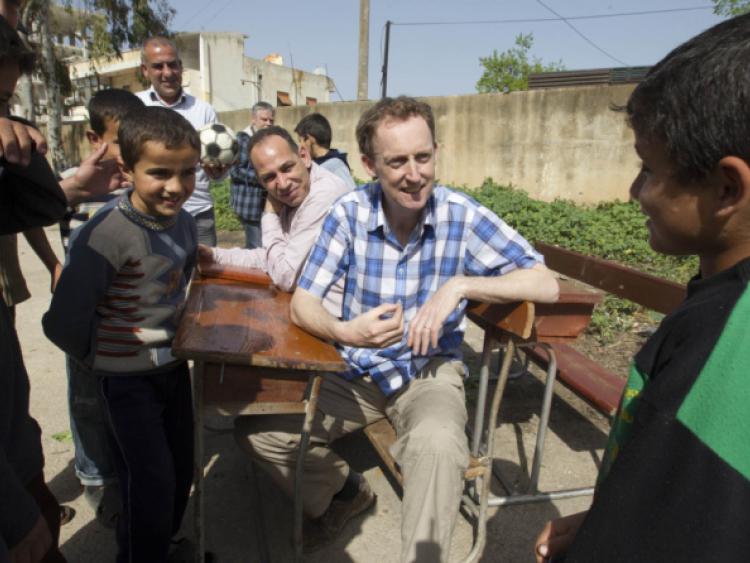 new CEO of GOAL visited Dundalk last week to meet local people and asked them to continue to support the aid agency.

He expressed the hope that primary and secondary schools in Louth will continue to support the Jersey Day, on October 4 this year and the GOAL Mile Run at Christmas.

He also spoke about GOAL’s work in Syria.

The agency is working in northern Syria providing for refugees from the civil war that has claimed 93,000 lives.

GOAL is the only Irish relief agancy operating in Syria.

Two million people have already fled the country across the border into Turkey, Lebanon and Jordan.

“We carried out a needs assessment to see if it was safe to operate and if we could meet the needs,” said Barry.

“These people have had to leave their homes in the war zone and they don’t have employment or a place to live.”

So basically they are living in an area that does not have adequate sanitation, food supplies or electricity.

GOAL is the only relief agency operating in that area and is helping 33,000 households.

They have 3,000 people in their worldwide operation.

“We have a mandate to help the poorest people in the world and we’re working hard on that mandate,” said Barry.

“Ireland still rates very highly when it comes to helping the poorest people,

“We are second highest in the world, second to Australia.

“We are actually giving more as austerity bites harder.”

Barry visited O Fiaich College Dundalk to thank the pupils for their participation in Jersey Day.

The college has been a keen supporter of the event. He also spoke about life in some of the world’s poorest countries, and what aid agencies like GOAL do on the ground.