‘Thank you very much, Sean would have loved this’ 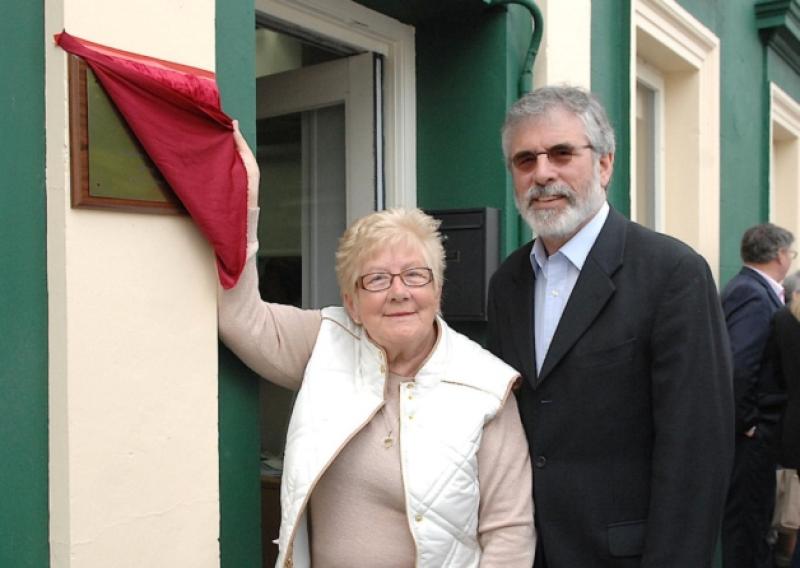 Thanks you very much, Sean would have loved this – the words of Sean Kenna’s widow, Eileen, at the unveiling of a plaque in his honour which was revealed at the official opening of the new Sinn Fein constituency office.

Thanks you very much, Sean would have loved this – the words of Sean Kenna’s widow, Eileen, at the unveiling of a plaque in his honour which was revealed at the official opening of the new Sinn Fein constituency office.

President of Sinn Fein Gerry Adams was on hand to open new office on Crowe Street, which Jennifer Greene described as “putting Sinn Fein on the map in Dundalk and Louth.”Speaking to the Dundalk Democrat Deputy Adams at the opening: “We spent almost two years trying to get an alternative offices, as the offices we had just weren’t central enough. I think we were very fortunate. We are very pleased with what is a very central location.”

There was a turnout of over 50 people who were treated to tea, coffee, biscuits and sandwichs.

Speaking to the attending crowd about the opening of the new offices.

The focal point of the opening was the unveiling of the plaque on Crowe, in honour of the late Sean Kenna, who died last year.

Kenna’s widow, Eileen had made what Deputy Adams called “the shortest speech in the history of republicism” and that maybe we “could all learn from it”.

“I would like to thank the Kenna family...We lost a friend, we lost a comrade, the Republican community, the people of Louth and of Ireland, lost an activist but of course Eileen lost her husband, the children lost a father and I think it is entirely appropriate that we have this little plaque her this morning. As Eileen said Sean would love this.”

He also commended Councillor Green for a wonderful year as Chairperson of Dundalk Town Council.

“We have moved to a prime spot here and I think it is an important mark for the progress of the party. Olive, with others, have staffed this office for a very long time. It is also part of our effort to deliver for people,especially in these very difficult times. If are in any doubt if you are in Government, of the dreadful effects of austerity, just spend and hour or two in a Sinn Fein office, and you’ll know how people are hurting.”