Youngest person to be awarded a civic reception 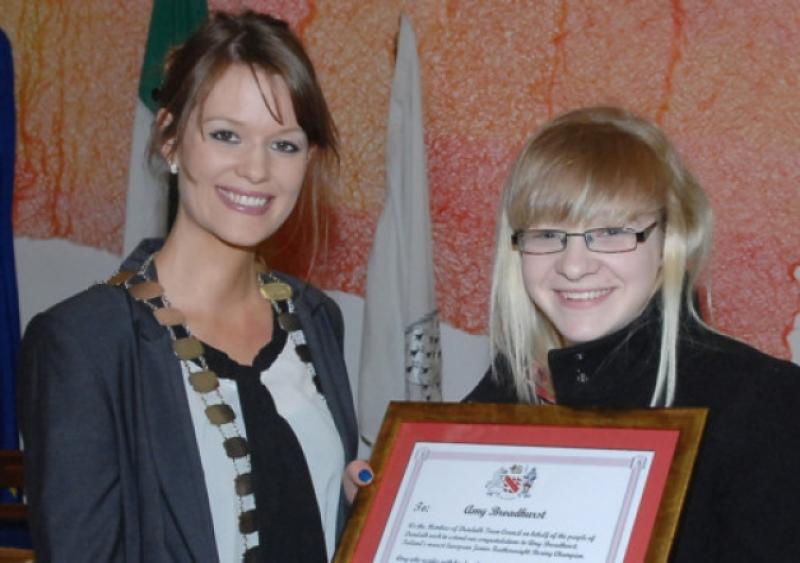 Cllr Jennifer Green, Sinn Fein council cathaoirleach said the members of the council extended congratulations to Amy who lives with her family in the Muirhevnamor area of Dundalk and follows in the illustrious footsteps of none other than Katie Taylor. She is only the second woman to win a gold boxing medal at the European Championships.

Any, who is a six-time Irish champion, entered the competition as the youngest competitor in her weight division and defeated opponents from Germany, Turkey and Russia on her way to claiming gold last November.

Amy is coached by her father Tony, Jim O’Connor and Anto Donnelly and boxes out of the Dealgan Boxing Club.

“Amy is an inspiration to young people throughout Ireland, and has shown that with a lot of determination and hard work, dreams can come true,” Cllr Green said.

Amy is the youngest recipient of a civic reception from Dundalk Town Council.

The town council also extended its congraulations to the president, officers and members of Dealgan Boxing Club who celebrate 75 years in existence.

Cllr Green said amateur boxing is a sport that is both physically demanding and mentally engaging.

“Dealgan boxing club pride themselves on creating a friendly yet competitive atmosphere for individuals to enjoy Ireland’s most successful Olympic Sport,” she said. “It is a testament to all involved with the club that over the years that so many champions have boxed out of Dealgan.”