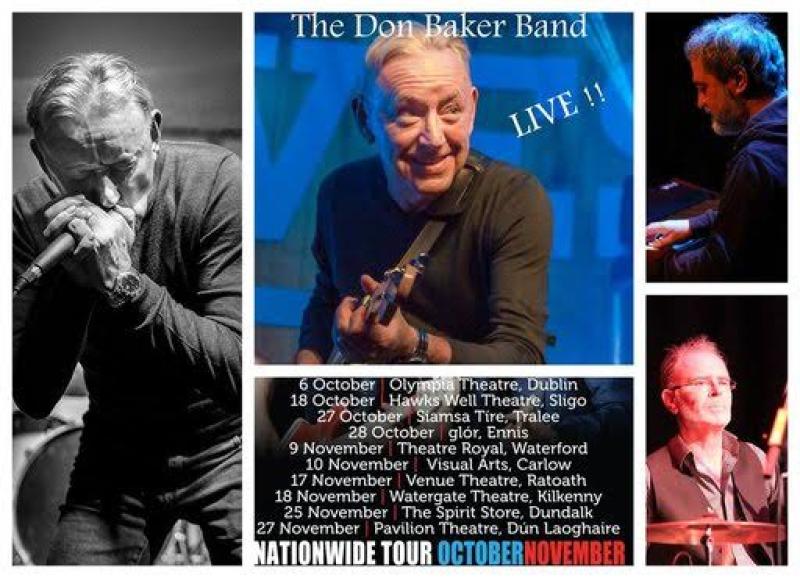 The legendary Don Baker and his band have been touring many of Ireland’s finest theatres to rave reviews in 2018 and will stop off in the Spirit Store on the 25th November to entertain local audiences. The band sold out many of their concerts this year and recently performed at the iconic Olympia Theatre in Dublin.

Don is a prolific singer/songwriter and musician, whose songs have been recorded by Sinead O’Connor, Declan O’Rourke, Finbar Furey and Liam Ó’ Maonlaí with U2’s Bono describing him as “the best harmonica player in the world”. The Dubliner has also released an amazing total of 17 albums during his career.

As an actor Don is best known for his roles in ‘In the Name of the Father’ alongside Daniel Day Lewis and as gangster Thomas Flynn in ‘Fair City’. He has also published several books on how to play the harmonica which have been translated into many different languages including Japanese.

The Don Baker Band features a sensational keyboard player from Italy, Salvatore Urbano from Naples. Sal has recorded with Damien Dempsey, Brian Kennedy, Sinead O’ Connor and Eleanor McEvoy and is widely regarded as amongst the best in the business.

He fuses the band’s Blues and Rock genres with creative flair. Hugh O’ Neill on drums, has performed with some of the biggest
names in the business, including Van Morrison and Jerry Lee Lewis, keeps up a driving rhythm. All in all Don and the boys guarantee a great night of Rock n’ Roll.

Tickets are €20 and can be bought at www.spiritstore.ie