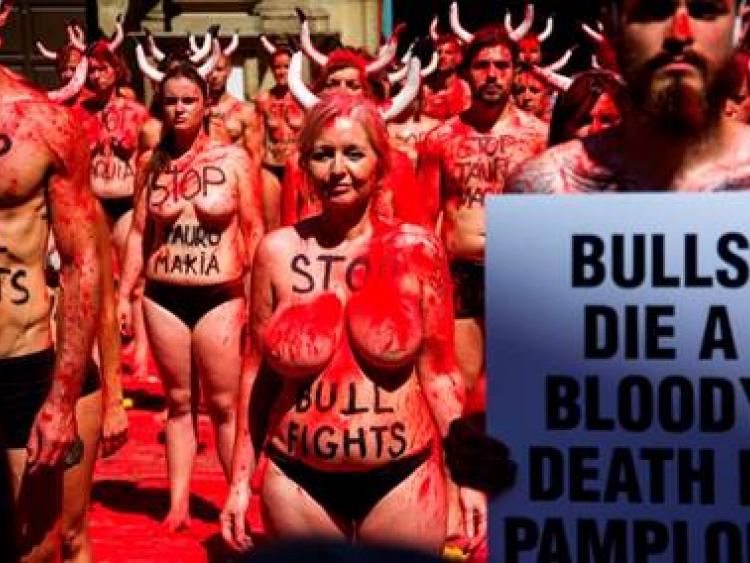 Most people have heard of the Running of the Bulls. Every July, there's always an article or two in the papers describing how some presumably drunken fool got trampled or gored during the annual spectacle in Pamplona, Spain. This year was no exception – and someone from Ireland was among those who met the end of a bull's horn. For most human participants, it's a game – something to tick off the bucket list. But for the bulls, it's a race of sheer terror that ends with death in the bullring.

To draw attention to the dark underbelly of the festival, I stood nearly nude in Pamplona's main square and covered myself with powdered "blood". While that blood was fake, the blood of the bulls who are stabbed to death in the city's bullring is very real. And that's why I was there, alongside 100 other protesters, to take a stand.

You see, the bulls used in Pamplona don't have the "luck of the Irish". In the lead-up to the run, they're held in dark enclosures before being forced out into the jeering crowd – usually with an electric shock prod. The narrow cobblestone streets are naturally slippery – even more so with all the spilled beer – and as the bulls are goaded on by revellers with sticks and rolled-up newspapers, they frequently lose their footing and fall, sustaining cuts and bruises and sometimes breaking their horns or bones.

At the end of the day, each exhausted bull is led into the bullring to fight to the death – except that it will never be a fair contest. From the moment he enters the ring, he has no chance of winning. First, men on horses run around him, repeatedly stabbing him with knives. His shoulders are soon coated with blood, and his lungs may fill up with it. When the staggering animal is struggling to breathe and stay on his feet, the matador comes in for the kill. The bull may still be conscious as his ears and tail are cut off as "trophies" and as he's dragged out of the ring in chains. Then, another bull enters the arena, and the horrific cycle starts again.

The number of people who condemn this blood sport far exceeds the number who defend it. Even in Madrid, widely considered its birthplace, thousands have marched in the streets calling for an end to the carnage. As one protester put it, "Bullfights are a national shame and if they represent me, then I am not Spanish."

Since Spanish people largely have no interest in attending bullfights, it's the tourists' cash that perpetuates the killing. Curious to see for themselves what a bullfight is really like, travellers buy a ticket or go along with their package itinerary. Although only sadists could depart the arena having enjoyed themselves, every euro spent – even by those who leave horrified – means that more bulls will be killed in this gruesome way.

To anyone considering running with the bulls in Pamplona, just remember: at the end of the run, after you head back to your hotel, the bulls are all going to face a painful, bloody death. By all means, immerse yourself in Spain's rich history, culture, and art and even take a run through its beautiful cities, but please, don't support cruelty to bulls.