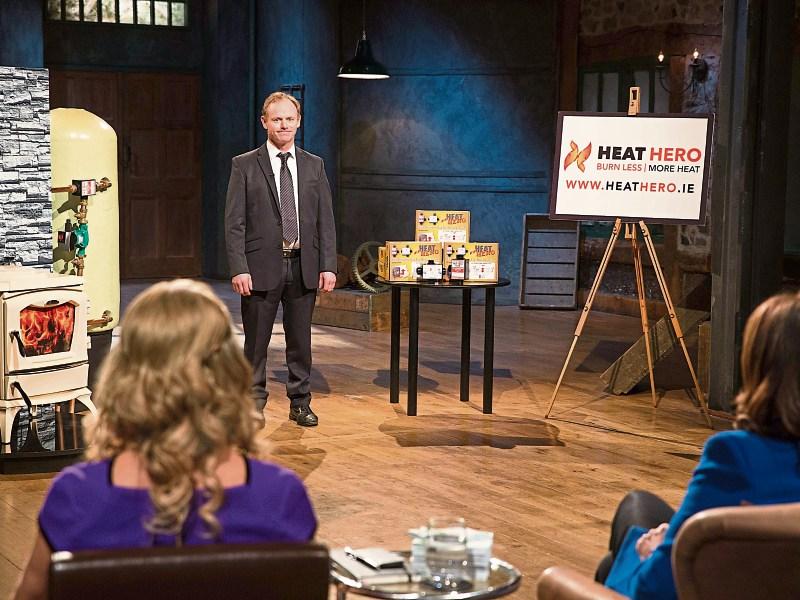 Arthur’s invention, Heat Hero, which allows all solid fuel boiler stoves to operate to their maximum efficiency, was awarded “Commended Best Innovative Product” at The Energy Show 2016 by SEAI, and on Sunday night caused Dragons Gavin Duffy and Eleanor McEvoy to fight it out to become an investor in this ground-breaking product. We spoke with Arthur to learn more about Heat Hero and how his encounter with the dragons went.

On talking about how the toil that went into creating a product like Heat Hero and the success that they are starting to see, Arthur said,

“When you’re starting out, it takes a good old push but it’s nice to start to ‘free wheel’ a wee bit now. We have the colleges coming out to us now, they’re anxious to get it into the colleges and to start teaching the young plumbers it. [It will become part of] the code of practise for domestic plumbing and heating for the future”

How did you develop the product?

“When you come across a problem and you sit down and actually study the problem, you kind of isolate what the causes are, and then you break it down and then come up with solutions and that’s basically what I did. Now I did it in my own house, I’d the heating down for a long time, up and down, and up and down and filling it with water and letting it out. It took me a couple of years.”

“The hard work seems to have paid off as Arthur now has a product that has solved the problem. “Everybody that has solid fuel, this improves it. It’s like a new way of doing it, it makes it more efficient. When oil and solid fuel are linked up together, and that’s why a lot of plumbers won’t even do it, the actual oil side of it becomes inefficient. Because of the way they’re linked up. And we fixed that problem as well. Stoves are 76-80% efficient and it was the system that was letting them down. So now the system is 100% efficient, now you have the full efficiency from your stove. And your oil is now 100% efficient in the link up system too. It’s a bit of a breakthrough to be honest, and now we’re moving across, we’re introducing it to the English market and they are accepting it very openly as well.”

How many are involved in getting Heat Hero off the ground?

“We’re working hard here. Myself and Adrienne, my wife, the two of us are here every day. We have a fitter and a welder and then we have somebody on the sales end of it as well.

“So there’s five of us. We outsource all the installs. There’s plumbers busy all over the country because of our system. They’re getting jobs installing them, people are upgrading their system and then we have a company in Limerick that manufactures the boxes for us. So even though we have 5 here with us we’re creating employment in other ways.”

Why go on Dragon’s Den?

“Well, like any new business you need all the help you can get and I suppose the experience of the Dragons is one thing. We have mentors that we used through the Government resources and that and the mentorship that we’re going to get from the Dragons, is going to be very valuable to us as well.”

What was the plan going into the Den?

“My request was for €60K for 10% [stake in the company]. Now I was open minded to all the Dragons or any of the Dragons but I had my eye on Eleanor and Gavin. Eleanor is an electricity provider in the North, she has 60-70 thousand customers, she’s in the energy field, so are we, so she fits nicely into a groove for us.

The hardest part was the pitch. I had a 2-minute pitch – once you got that over, the questions I’d be used to answering, because I’d be talking to plumbers every day. I know the questions weren’t going to be an issue and I had the finance off as well. It all went very smoothly, there was a bit of banter as well. Gavin was interested, he put a bid in then for 30%, all the money for 30%. Eleanor was interested as well.

“The five of them stayed there for a good while as well but I really knew that it was either going to be Eleanor of Gavin, that’s kind of their field. Eleanor put a bid in then, but put in a bid of all the money for 32%. So it was a wee but over what I was looking for, but I thought maybe if I could get the two of them at 15% each, it wouldn’t be a bad story.

“I put that to them. Gavin was keen enough on working along but Eleanor wasn’t budging. She wanted it on her own and that was it. It was kind of obvious from her language that she wasn’t moving on the percentage either. The thing about it is, she has a good insight. I went with Eleanor then. Gavin could get me into stores but we’re already in 150 stores, so we have that cracked. I know he would have been a good mentor as well, but she has the contacts and immediately she came up with a vision of what she wanted to do with us.

“So I knew I did the right thing, there and then. The fact of the matter is, if you don’t give them a carrot, they’re not going to put the effort into it.

“We have to cross the water with this as well, so we need all the help we can get. She’s in Northern Ireland and has a lot of contacts in England. England’s a huge market for us.”

One of the issues Arthur faced with his product was helping people understand why their current system was not as efficient as it could be and how Heat Hero could help solve this issue. “What we found up until now, was a lot of people were getting it difficult to understand the system.

“We came up with a 2-minute video on our website. [Now] we’re finding across the board; people are understanding that system. The colleges even loved it and they’re putting it in front of their pupils.

“It’s in Metac [in Portlaoise] and Martin Hogan Energy Training in Finglas. Our big breakthrough was that video.

“Before the video, I used to try and explain it and you would explain it but they wouldn’t see it. We’ve been told that the best thing we’ve done is that video. All I have to do is tell plumbers to look at the video. It’s only 2 minutes long.”

If you want to understand more how and why Heat Hero works and how it increases efficiency in a solid fuel system, you can see the video for yourself by visiting: http://heathero.ie/video/