Blackrock AC keep up the tradition at Armagh Road Race 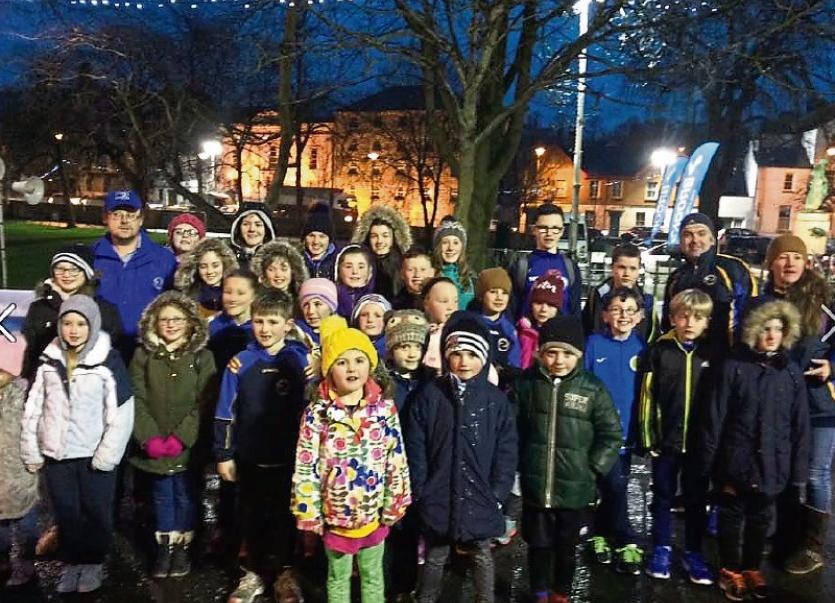 ARMAGH was the destination for a bus load of athletes, coaches and parents last Thursday night as Blackrock AC kept up their long tradition of competing at the Armagh International Road Race.

This is a huge event which traditionally attracts hundreds of juvenile and senior athletes from Ireland and the UK and this year’s event was no exception.

Grace McEvoy and Ashling Finnegan were the club’s first athletes to take to the line in Race 1 which was run over 400m. Both girls ran brilliantly and held their own a huge field setting a very high standard for the track season ahead.

In Race 2 it was James Scanlon who stole the show as he produced a stunning performance in his very first road race earn a place on the podium and collect a very nice trophy for his efforts. Hopefully the first of many to come for this talented athlete.

Race 3 saw Blackrock’s biggest participation in a single race as six of our girls lined up for a tough 1400m around the Mall. Ruby Nolan, Jessica Scanlon, Emmy Jeytoo, Erin Finnegan, Megan McEvoy and Aislish Fee made up the magnificent six and all put their heart and souls into covering the distance cheered on by a noisy crowd of athletes, coaches and parents alike.

Next up for their 1400m challenge were cross country campaigners Sean McKenna and Jack Greene who were joined by Nathan McCreesh on his first competitive outing of the season.

Just like the girls in the previous race the boys got their heads down, gritted their teeth and got on with the business of making it to the finish line in as fast a time as possible. A job well done by all three.

Race 5 saw Rebecca Baldwin, fresh from a series of excellent performances at the Leinster Indoor Championships, Grace Rodgers and Ellie O’Shaughnessy fly the Blackrock AC flag in another race with huge numbers taking part. Just as expected all three produced their very best and finished with excellent times.

Ethan Doherty, Alex Gormley and Sean Reilly formed the Blackrock entry for Race 6, with all three taking part in another highly competitive 1400m race against athletes some of whom were a full year older than the lads themselves.

As expected the boys performed admirably with Sean managing to grab a top 15 finish with his club colleagues coming home not too far behind.

Race 7 saw Neasa Reilly maintain her superb form over the middle distances so far this year by adding another silver medal to her vast collection. This came the night after another brilliant performance in which she was literally pipped on the line for a gold medal in the Leinster Schools Cross Country Championships. Fingers crossed for it being third time lucky at the all Irelands in early March.

The Hughes brothers, Donnacha and Oisín were the last athletes in yellow and blue on the night with both giving an excellent account of themselves in the junior mens 3000m event.

At the end of racing it was chips and a drink all round for our tired but happy athletes with everyone in agreement that it had been a great night.

Next up is the Leinster Inter Club Relays which will mark the clubs first visit to the new National Indoor Arena at Abbotstown. This should be a great occasion and with teams entered at all age groups we are optimistic for some winning performances.