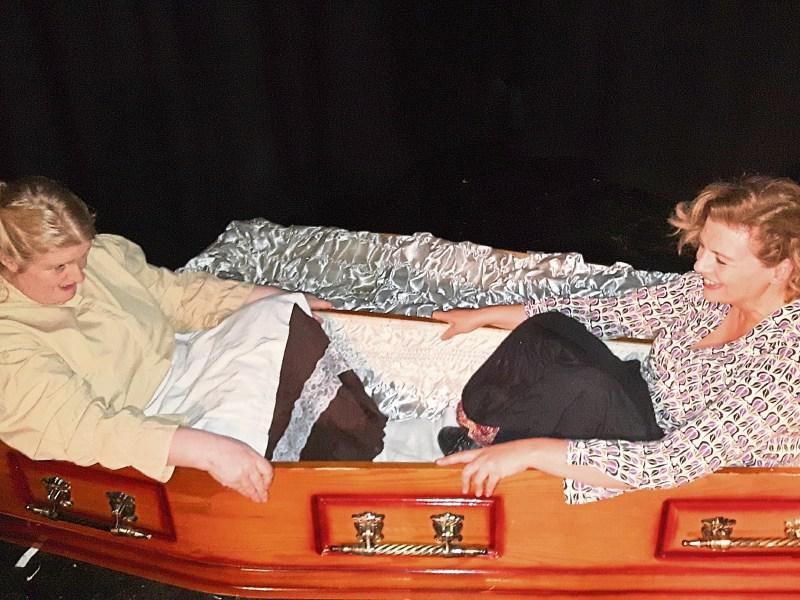 GASLIGHT Players are a new group formed with the express aim of competing in the DLI One Act Festival, under the direction of Frank McGrath.

Following their debut in The Market House Dunleer in October and tour on the Festival Circuit The group are pleased to bring their production of Two Sisters by Caroline Harding home to the Stonehouse, Blackrock on Tuesday 31st January at 8.30pm.

The group did remarkably well for their first time on the Festival circuit gaining two 3rd places and one 4th over four competitions.

‘Two Sisters’ by Caroline Harding is a black comedy set in 19th century Russia which casts a passing nod at Chekov's Three Sisters and other Russian classics. Born into the a rich landowning family, sisters Anya (Joan Wilson) and Sonia (Eimear Boyle) fell on hard times when their father lost his fortune. When Anya arrives home one night to find an unexpected item in her room, it acts as a catalyst forcing the sisters to face home truths about their lives and their past, present and future.

Blackrock’s own Joan Wilson said of her part,

“I'm playing Anya, the younger of the two Verenka sisters. The play is set in 19th century Russia and echoes the era and themes of Chekov and Tokstoy. The two sisters were born into a rich landowning family, but in the best tradition of Russian Drama suffered a reversal of fortune.

“My character is euphemistically described in the character description as "free with her favours to men"! She's also fond of a drop. The older sister Sonia, played by Eimear, doesn't approve of her lifestyle, but she's not exactly pure and innocent herself”.

According to Joan she was immediately drawn to the part, under the direction of Frank McGrath.

“Gaslight Players came together with the express purpose of putting on a one-act play for the Drama League of Ireland One Act Festival. Frank Mc Grath who directed us, was involved with groups in Kildare and Nenagh before he moved up here. He has a long affinity with the One Act Festival Circuit through these groups and was interested in going back into the competition. When he came to me with this script I could immediately see what a cracker it was! It's a great story- bawdy, funny, and touching in parts.

“The sisters run the whole gamut of emotions in the course of a night, so it's a fantastic part to act. I liked the idea of the challenge of the Festival Circuit too. The last time I did that I was young enough to play "Sive" with Pat McKenna and the Castle Players. That's not even in this Millenium!”

“ I hadn't done anything for a good few years. There's nothing like a few children to fill your spare time! I'm only getting back into things again over the last year or two. Recently I've done one or two with Pop-Up Productions which were written for the group by local writer Joan Ryan.

“The last one was based on the lives of women who were imprisoned in 1916 and was staged in the Gaol. I played Marjorie, the posh woman with HaggleRock in Gráinne Jordan's "Only an Hour From Dublin". I also played the fairy once in Dundalk Musical Society's panto "Snow White".

And for Joan the only thing better than going to see ‘Two Sisters’ is actually performing in it,

“It's very funny. You definitely will laugh! I loved it! I loved the craic on and offstage with Eimear and the rest of the group. Schlepping a coffin round the country takes a particular kind of stage crew and the looks we got as we landed in various locations was priceless! It was great to work with Frank as director and I feel I've learned a lot.

“Also the part itself was a challenge and a joy to do and I'm very grateful to Frank for the opportunity”.