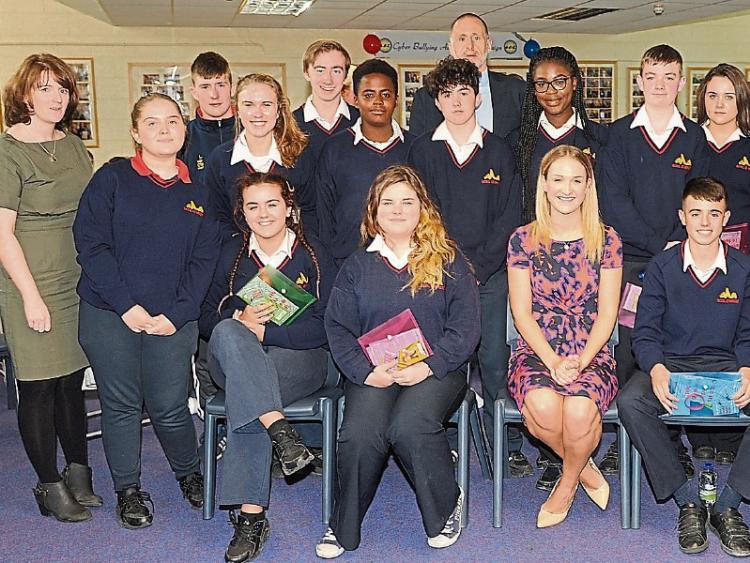 Minister Helen McEntee, front, at the launch of the cyber-bullying campaign.

Minister McEntee praised the efforts of the three schools in working in partnership to tackle something which often stays hidden, but can have a dreadful impact upon the mental health of our young people.

Parents and the home school liaison teachers from the three schools had previously formed a Local Education Committee (LEC) to explore areas of common interest. The cyber-bullying awareness campaign is the first such initiative.

An awareness pack which contains advice and information will be given to the 2,000 students attending the three schools.

Agencies, including ISPCC and Boomerang, will provide information sessions for students and parents in the three schools.

A group of students from each school will be trained as IT mentors as fellow students may feel more confident to approach a student rather than a teacher if they are being cyber-bullied.

Ciara Durrigan and Carol Ward, parents from Ardee Community School, told of the effect of cyber-bullying on families, and a short but powerful film from Carol’s daughter, Kayleigh, explained the devastating effect cyber-bullying can have on adolescents. Mary Maguire from O’Carolan’s College, spoke of the importance in resourcing mental health services for the young people attending the three schools.

Mary Jackson, Principal of Ardee Community School, said cyber-bullying has become problematic for secondary schools as it largely takes place away from school.

It may be hidden and it is difficult to investigate. Alan Duff outlined ISPCC’s services to young people in relation to the topic, and national coordinator for Home School Community Liaison (HSCL) Fionnuala Mac Aonghusa, recognised the role played by the three HSCL teachers in initiating the local education committees.

IT mentors from the three schools were presented with awareness packs by Bridget Smith, HSCL for Ardee Community School, and Antoinette Rourke, chairperson of the parents association Scoil Uí Mhuirí. Prizes were also awarded to the winners of the LEC logo competition.