JOE CARROLL: Privileged to have Liam Leech as a friend and also colleague 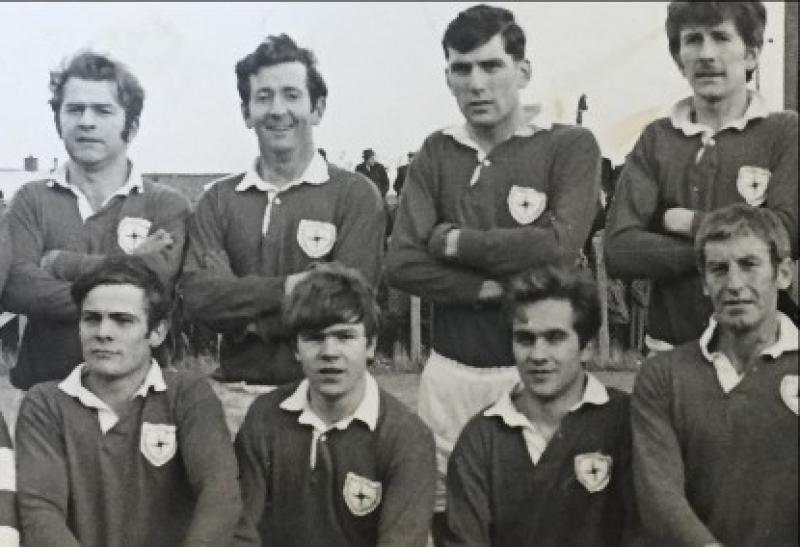 Liam Leech (back row, second from left) beside Joe Carroll (to his right)

My first game with Louth seniors was in a challenge with Down in the mid-1960s. It was at St Brigid’s Park, part of the then fledgling Dundalk Maytime Festival programme. (It may have then been known as the Grain & Grape Festival). I was on the forty, and had Tom O’Hare in direct opposition.

Tom, who had yet to win his All-Ireland medal, didn’t stop me from scoring a point with my first kick of the ball, but that was more or less it; I did nothing much for the remainder of the game.

I’d have to look up the files to see how the Louth team lined out that day, but I do know that Liam Leech was on the left wing; he gave out to me for taking the wrong option, one of the many mistakes I made.

That would be the only cross word that ever passed between us. In the decade or so which followed we shared an interest in the Louth jersey as players and members of the team management. The friendship that was established then would endure for many years after both of us got too old to play football and the triumvirate we formed with Jimmy Mulroy broke up.

I visited an ailing Liam in the Louth Hospital last year. He had difficulty recognising me and the conversation wasn’t great. In an effort to stimulate some chat, I brought his fellow patients into it, telling them that here was a man who won eight Louth senior championship medals. That must have struck a chord with Liam: “It was nine, and I won leagues as well”, he said.”

Liam’s death last week broke another link with the all-conquering Newtown Blues team of the 1960s and 70s. But more than being a gifted club and county forward who not only tormented the sturdiest of defenders and ran up tallies that constantly made him the county’s leading scorer, he was a gentleman, a person you’d be privileged to call a friend.

Like many others, I had difficulty keeping check on Liam and his Newtown Blues colleagues in my club football days, toiling with Dundalk Gaels. After we’d fallen to the inevitable defeat, we could only look on as the Drogheda men most times continued to steamroll all before them.

Nine championships and various other competitions made their way to Newfoundwell between 1961 and ’74, and Liam, along with Jimmy Mulroy, Matt Murphy and Jim 'Blackie' Judge were part of them all.

Before completing his haul, Mulroy was named Louth manager, succeeding a selection committee at the beginning of 1973.

No surprise that Jimmy should have named the non-smoking, teetotal, fitness fanatic Leech as trainer, but when he chose me as his assistant there were, as they say, raised eyebrows, mine included.

What put me on par with the lads was my lack of experience at this level. But we got on with the job, running up a whole sequence of wins in the first half of ’73, and only tasting defeat for the first time in a championship match with All-Ireland champions, Offaly.

We had beaten Dublin in a replayed second round match in Navan with Liam coming on as a reserve and playing a key role.

He was an obvious choice to start against Offaly at Croke Park on the following Sunday, but for some reason – maybe fearing that at 35 he was beyond a starting spot in a championship semi-final - he rejected all pleadings from Mulroy and myself to line out. On a day when Offaly, All-Ireland champions in the previous two years, benefited from our many missed chances, he could have turned a narrow defeat into a win.

There were highs and lows in the two years we were together after that. There were also wrong calls, and, of course, some minor differences with the County Board, none of which was allowed to develop into a crisis.

The two boys continued to play football, and in 1974 brought their championship medal-haul to nine. On the day Blues beat their great rivals of the time, Cooley Kickhams, by one point in classic replayed final at Ardee, Leech was in his customary left-wing position and Mulroy at full-back, I harked back to the previous year – if only the No 12 wizard had worn the red jersey at Croker.

On every occasion, bar one, that I met Liam after that - even when there was sadness all about - there was always a warm handshake and a smile. Like Jimmy Mulroy, his and my long-time pal, he’ll be missed.