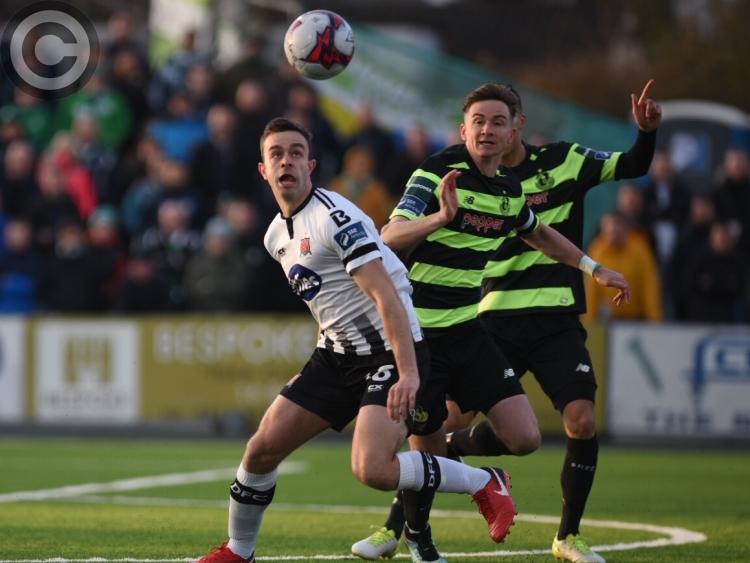 Midfielders Robbie Benson and Chris Shields were the goal-scoring heroes for Dundalk FC tonight as Shamrock Rovers were sent crashing to a 2-1 defeat at Oriel Park - a result which sees Stephen Kenny's men to the top of the table for the first time this season.

Looking to pick out a team-mate in the centre, Shields' right-wing delivery looked to be trickling into the grasp of Horgan only for the custodian - brother of former Dundalk winger Daryl - to inexplicably allow the ball to pass him and finish in the net with the aid of the post.

At this stage, midway through the second half, the hosts looked home and hosed. But Rovers forced their way back into contention with Dan Carr's flicked header and only for the intervention of Gabriel Sava, substitute Gary Shaw and Graham Burke would have drawn the Tallaght men level as the match ticked towards full-time.

Indeed, the nervous moments continued as Stephen Bradley's men chased a leveller, but Dundalk stoutly held their ground, even if they lost their record of failing to concede a league goal this term was ended at the ninth attempt.

Despite fielding the same line-up as the one which cantered to victory at home to Bohemians last time out, the succession of efforts from Hoban and Benson provided the game's first attempts on target. This despite a first half where both sides went close to opening the scoring.

Former Fulham man Seán Kavanagh dragged a shot wide for Rovers early on, while, later in the half, the winger picked out the corner of the net only for the assistant referee to have it ruled out for offside. Ex-Lilywhite Ronan Finn also went close when rounding the advanced Sava 20-yards from goal, however, Seán Gannon was on the cover to aid his 'keeper.

Dundalk, for their part, offered a threat through the irrepressible Michael Duffy on the left wing and he created arguably the best chance of the opening half when teeing up Hoban who diverted off the crossbar. The Foyleside flanker also rattled the post with a bullet header.

But a super third quarter performance yielded the strikes - on 52 and 61 minutes - which sealed a memorable home victory as The Lilywhites recorded their first league win over Rovers since February 2017.