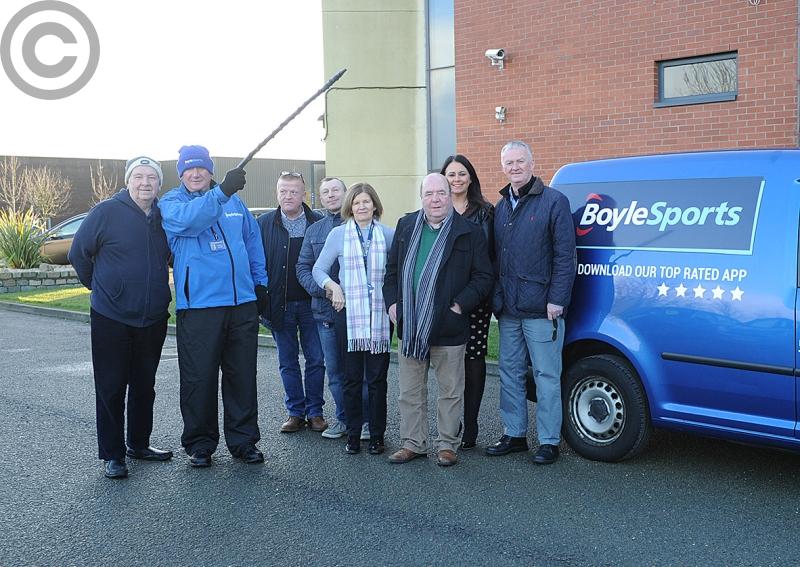 Brian Murphy (second from left) and members of the respective charities and Boylesports at the company's HQ in Dundalk this morning. (Pic: Arthur Kinahan)

Brian Murphy has been involved with greyhounds for longer than he can remember. From the time he was growing up in Newry he's owned them, trained them, and for a while graded them in his role as racing manager.

He's been on both sides of the punting fence. As an owner and trainer he'd have taken the bookies on quite often – now he's siding with them as an employee of Boylesports, the nationwide firm which has its headquarters at the Finnabair Industrial Estate on Dundalk's inner-relief road.

His time as racing manager wasn't spent at an Irish track, or even one across the water. A far more exotic location than that.

He went to Macau to train greyhounds with Newry compatriot, Pat Larkin, at the only track in the Middle East back in the 1980s, and in the course of a  very successful stint racked a huge number of winners, the first home in the $100,0001989 Carlsberg Derby final being among them.

He'd have been happy to continue feeding, grooming and exercising his charges, the majority of them Australian-bred; but when the offer to become racing manager at the Macau Canindrome came his way he had little hesitation in accepting it. (That surely gave him an esteemed place among  the many poachers who have turned gamekeepers!!)

That's the past. Coming up next week is the beginning of another adventure for the popular Downman, and it has only a very minor link with greyhounds.

On Thursday morning he set out on a charity walk from BoyleSports HQ that will take him all the way to Clonmel. It's a long way to Tipperary, but Brian is hoping to do the journey in eight days, it's completion on Friday, February 9, coinciding with that weekend's beginning of the National Coursing meeting at Powerstown Park in the Co. Tipperary town.

The benefiting charities are, the Irish Cancer Society, the Irish Injured Jockeys' Fund, the Kevin Bell Repatriation Trust (which helps families bring home their loved one's remains when death occurs overseas), the Irish Retired Greyhound Trust, PIPS (which is a suicide prevention charity in the North), and Flame Spirit, a Liverpool-based golf society which raises funds for children in need.

The hours he put in walking greyhounds might be too far back for him to benefit, but Brian has been in training since last and is confident he'll be able to stay the course, the first leg of which takes him to Drogheda.

Anyone wishing to contribute can get in contact with Brian and bmurphy@boylesports.com.