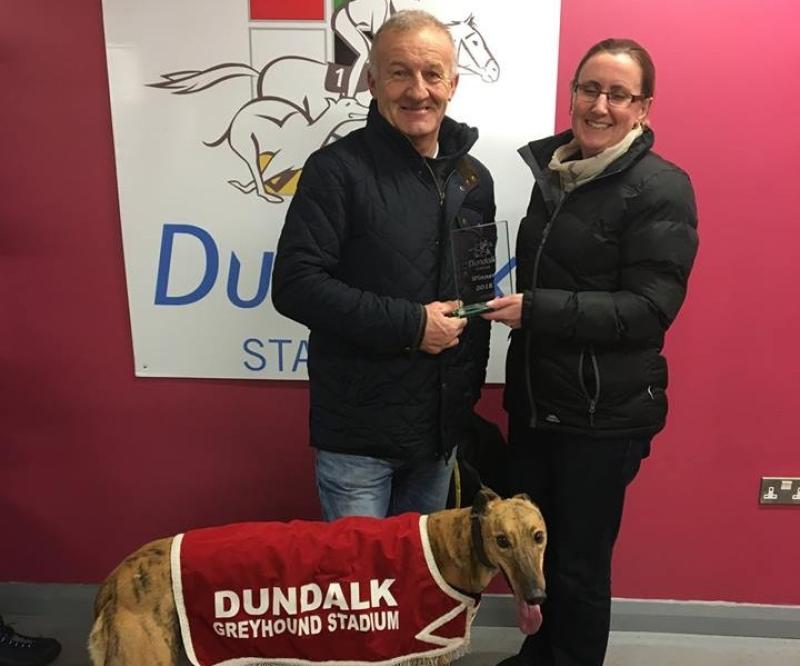 The Find us on Facebook A3 525 Final was won by Blakefield Flame in 29.20 for owner & trainer Seán Devlin from Armagh; Dundalk Stadium racing manager Margaret Kavanagh presents trophy.

Colm Farrelly's kennel, one of this area's the most consistent in recent times, went close to recording a notable double at Dundalk Stadium on Friday night last.

Shortly before Sin Away made most of the running to win a graded 525, his litter-comrade, Climb The Walls, almost caused an upset in the final of the Find Us On Facebook 525.

Led down the back straight by his semi-final conqueror, the fast-starting Blakefield Flame, Climb The Walls closed rapidly between the final two bends, before gaining a narrow lead. He was being cheered home by his followers, but Blakefield Flame, well supported in the betting, renewed his effort, getting up close home for a narrow victory over the local runner.

Trained and owned in Armagh by inter-county footballer, Seán Devlin, Blakefield, now of nine of his 33 races, won a prize of €650.

This column's selection, Tidal Wave, never recovered after making a slow start, finishing among the also-rans.

Sin Away was always prominent in a race for which the highly regarded Geedee Allstar was a leading fancy. The Meath-owned youngster was slow to get going, and it was too late when he got into the picture, taking spot behind the Farrelly runner. It was, however, only the Martin Lanney-trained dog's second run, and with more he can fulfil the promise he has sown in trials.

with the traps caused a lengthy delay on Saturday night. The semi-finals of the Park Cafe Dual Distance were the feature, and after one of the three qualifiers had been run, the other two had to be put back until repair work was carried out.

The little-used 620 was the distance, the first two in each semi qualifying for this Saturday night's final over the 670. Mildean Nicky O was a runaway winner of her race, scoring by eleven lengths in 34.06.

That puts the English-owned runner away ahead of the others, the fastest of which was Kilmessan Royal, who, in clocking 34.66 came home nine lengths clear of the Newry challenger, Brannock Dapper.

David Dunne's Dromiskin runner, Geraldines Boy, came in as a reserve to win the third semi-final, and she, too, had it all her own way, finishing almost six lengths in advance of Rosies Dilemma in 34.70.

Racing opened with Deja Dynamo winning for the enthusiastic members of the Louth Lads Syndicate. Bred by her owners, this August '16 whelping is trained by Denis Farrelly and she put in a strong finish to win over the 400 from Says You Dubh.