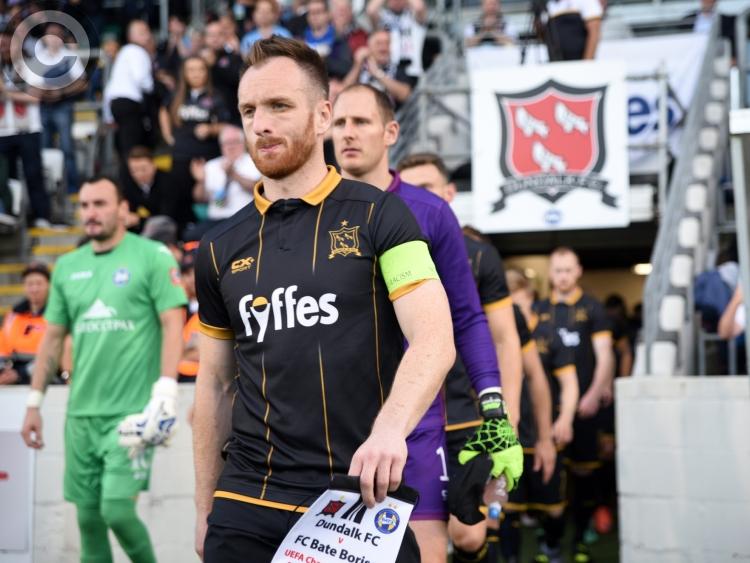 While records relating to club captains are not altogether clear, after consultation with Dundalk FC historian Jim Murphy, and his records, it has been confirmed that no previous skipper has surpassed O’Donnell in terms of his five, and soon to be six, seasons wearing the armband at Oriel Park.

Dundalk’s record goalscorer, Joey Donnelly, rivals his term having captained the side in the 1938-39 season before re-assuming the position between 1940-43/44. The great Henry Hurst also held the honour in the 1930s, but nobody has ever led the team in to a sixth season.

The Galway man has made 100+ appearances for the club since joining ahead of the 2013 campaign, while he is the only Dundalk captain to have lifted the league championship more than once. In fact, in terms of major trophies won, he’s the club’s most prolific title-winning skipper.

When his feats as captain were put to him, O’Donnell was understandably taken aback, almost lost for words.

“I’ve never had a moments’ thought about it, to beat people and captains who’ve been at the club longer than me, I suppose I feel fairly proud, especially considering the success we had in the period in between,” the 31-year-old said in a flabbergasted tone.

He continued: “Captaincy can be overblown sometimes in a sense that you’re just another player, but it’s a great honour to be captain of Dundalk and it’s, of course, something that I take very seriously.

“When I finish my career, it’s something that I’ll probably look back upon with a bit more sentiment and there’ll be a lot of pride there as well to have been associated with a club at such a successful period. But, at the minute, it’s about trying to refocus on getting ready for pre-season and winning the league title back,” O’Donnell added.

It’s hard to forget the midfielder’s performance in the league decider of 2014; one of many great games the former Arsenal trainee has had since first donning the Lilywhite jersey. The heartbeat of Stephen Kenny’s team over its five-season span to date, O’Donnell is leadership personified. However, he admits that this wasn’t always the case.

“Early in my career, I wouldn’t have been the most dedicated regarding my profession. I would have always had a decent attitude, but extra-curricular stuff like being in the gym and getting the body in the best shape, that’s all come on since I’ve joined Dundalk and I think that all helps you mature. I’ve become a lot more mature.

“We had a very young, inexperienced squad in the first season and I’d a bit of experience so the manager made me captain and it snowballed from there. I don’t do anything out of character or out of normality for me, I just be myself. I don’t know if it has worked or not, but we have had a decent enough period in that time. Personally, I act the way I would even if I wasn’t captain and hopefully you bring a few other lads along with you,” said O’Donnell.

Regarding his future, he is contracted to extend his stay, and captaincy, into a sixth season in 2018. However, considering his troubled recent history with injury, O’Donnell was unable to confirm if he will be remaining with the Lilywhites beyond that date.

With his impact and driving force from the Dundalk midfield being so great, his side automatically look a different proposition when O'Donnell plays. But, apart from his warrior-like spirit, does being captain hasten his attempts to return at the earliest possible date from every knock?

“But, then again, I’d be motivated enough to get back from injuries as quick as possible so being captain or not doesn’t make all the difference. It’s frustrating when you're injured because you can’t be seen to have the same influence around the place when you’re not playing.

“Sometimes it can be hard trying to tell someone what to do when you haven’t been available. Lads aren’t stupid, sub-consciously they might be thinking ‘well, you get yourself injury free' or something whereas when you’re playing every week it’s far easier.

On his future, O’Donnell replied: “A lot has to do with form and how things are going. I can’t say that (I’m going to be here beyond 2018) and turn up next year, be useless and not play a game. I can’t expect to get a contract after that. Like every other player, a lot of it goes on form if you get a new contract.

"I’m just trying to get my body in as good a shape as possible so that I can be available for a lot more games this season. I probably will have to be used differently to the other lads because my body can’t take the load other, younger lads can take. Hopefully, I’ll not be used that sparingly, but treated a little differently every now and then.”

The sentiments of Dundalk FC’s captain, leader and, most certainly, club legend.