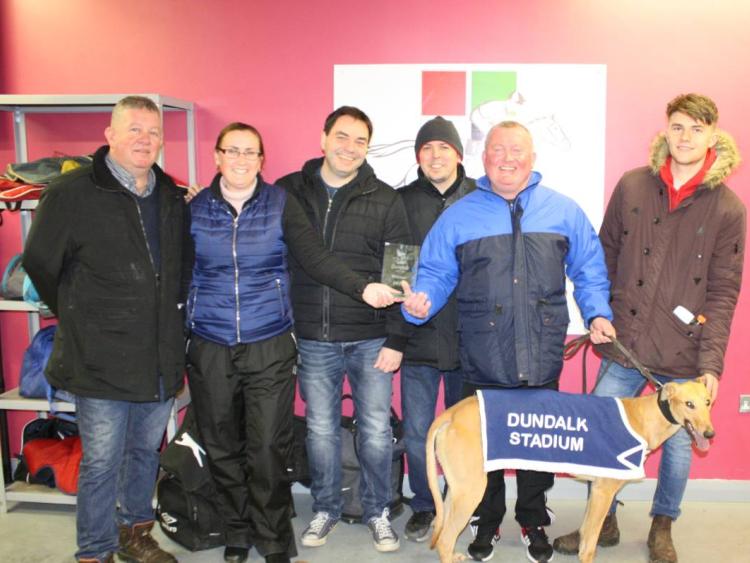 The clash of the big two in the second round of the the An Cu Veterinary 525 at Dundalk Stadium wasn't as closely run as the betting suggested it might be.

Jennys Boy (28.67) and Sheahdoah (28.77) went fastest at the opening session, both leaving the traps with haste before carving out the easiest of wins. This time, however, Jennys Boy was poorly away, while Sheanadoah was quickly enough away to contest the early lead with Groveshill View.

The Tyrone-based Sheanadoah, a 5/4 chance, took up the running in the back straight, and maintaining a strong gallop after that got to the line just over four lengths clear of Groveshill with evens fav, Jennys Boy, doing enough to take third and qualify for this Saturday night's semi-finals.

The winner's 28.87 wasn't the fastest clock. Courtlough Cindy, running for Balbriggan's Anthony Rooney, cashed in on a lightning break to lead all the way, finishing just over a length clear of Maysmorningrun in 28.85.

Tontos Choice, a kennelmate of Maysmorningrun and Jennys Boy, earned trainer, Laurence Jones, some compensation by taking Heat 2 in 29.27, and Curious Girl was the other heat winner, the 6/1 chance proving a couple of lengths too good for the regally-bred Slippery Cinders (Slippery Robert-Kildallon Maid) in 29.32.

Sheanadoah has a plumb trap 1 draw in the first of the semi-finals, and should prevail, while, if wearing his trapping boots, Jenny Boy can get back to winning ways in the other qualifier.

Sponsored by Blackrock vet, Brian Jones, the An Cup carries a first prize of €2,000.

Also featuring on Saturday night's card is the final of the Eamon McCrave Memorial 525, a €1,100-to-the-winner competition commemorating a much-missed young man who had a great love for coursing as well as greyhound racing. Eamon's family are sponsors.

The likely favourite, Droopys Wallace, will wear the blue sheet. Trained by Martin Lanney, who remains locked with Laurence Jones in a tremendous head-to-head for the track's to trainer award for the season – there's just one between them, Jones in front - the syndicate-owned dog held on from Tyrone runner, Ely Way, for a half-length win in 28.80.

The other semi-final was won by Michael Cunningham's Drogheda runner, Valeries Express, who was best placed to avail of the long-time leader, Santro Bull, cramping when appearing to be home and hosed. Scoring a sixth career win, Valeries won by a neck from Kevin Commins' Penny Marvel in 29.33.