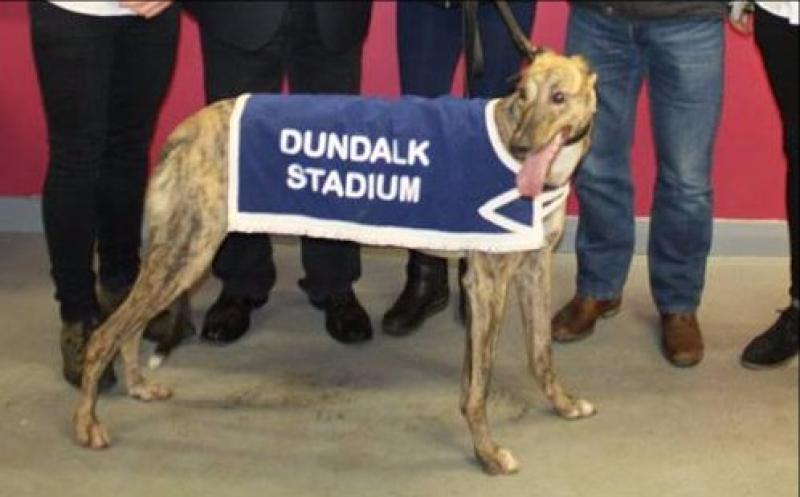 There were eight races on the card and four of them went to kennels in the club's catchment area, with Ambrose Quinn's establishment responsible for three of them and David Dunne's the other one.

Well Brother set the ball rolling with victory in a 350, and he was followed into the winners' enclosure by kennelmates Young Willie MC and Elsa Blue. The prolific Razldazl Lily is dam of all three, with Well Brother and Elsa Blue belonging to the same Vans Escalade litter.

Owned in partnership by trainer Quinn and bookmaker, Barney O'Hare, Well Brother got up to beat Buckos Boy justifying his even-money quote. The same combination was down for Young Willie MC, who overcame trouble early on to win by five lengths over the 550.

Elsa Blue, running in the name of her trainer and Martina McCann and, like Young Willide MC, an odds-on chance, had it easier in a 525, taking the lead early on and staying on well to get the better of the Drogheda runner, Valeries Express.
Bennys The Boss was having only his second outing for David Dunne in a 400, and he ran a fine race to score by almost three lengths from Coolronan Joey in 21.63.

Pennys Marvel was another winner on the card, Kevin Commins' Ardee-based two-year-old turning in a career-best run to win over the 525 distance by almost seven lengths inn 29.00.

Ambrose Quinn's treble wasn't the only one of the weekend at the Dowdallshill venue. Gary Silcock made Friday night's meeting his own, earning winning brackets for three of the Santos, 'Eclipse', 'Vic' and 'Bull'. They were the Gilford owner/trainer's only runners on the 8-race card and only the first-named was hard pressed in scoring.

All are from the same 2-year-old litter, by Ballymac Vic ex Paradise Serena, and Vic has now won five of his ten races. This lad went off fast from five in a 525, and when it came to the run-in he had enough in the tank to hold the late challenge of Steely Dynasty.

Santro Eclipse also won over the standard distance. He was engaged in a race-length battle with Fridays Tess, and it was only by a head that he prevailed in a useful 28.87.

Santro Bull was down in distance having won over the 525 on his two most recent outings, and though taking a wide course into the home straight had too much pace for the others, winning from the Clogherhead runner, Greenwell Jeanne, in 21.67.

Monleek Dakota won on the same card for John and Rita Downey, the recent addition to connections' Tullyallen kennel showing lots of boot to record an excellent 21.30 for the 400. And there was also a smart 550 win for Pat Quinn's Drumsna Star, the now-winner of 17 races appreciating a drop in class to win unchallenged in 30.09.

Seán Maguire, who died on Monday of last week, was the hare-driver at Dundalk Stadium up until the onset of illness, which he fought with bravery, a few years ago. Known to his friends as 'Scuds', he was hugely popular with management and racegoers alike, and this was reflected at the turn-out for his Requiem Mass and in Church of the Holy Family and burial at St Patrick's Cemetery..

Seán was in his early 50s, and prior to taking up employment at Dundalk Stadium and before that the old track on The Ramparts, he was attached to the late Tommy 'Tuckser' Cahill's kennel in Chapel Street, helping with the preparation of runners and, indeed, having a few run in in his family's name.

Sympathy is extended to Seán's family, friends and relatives.