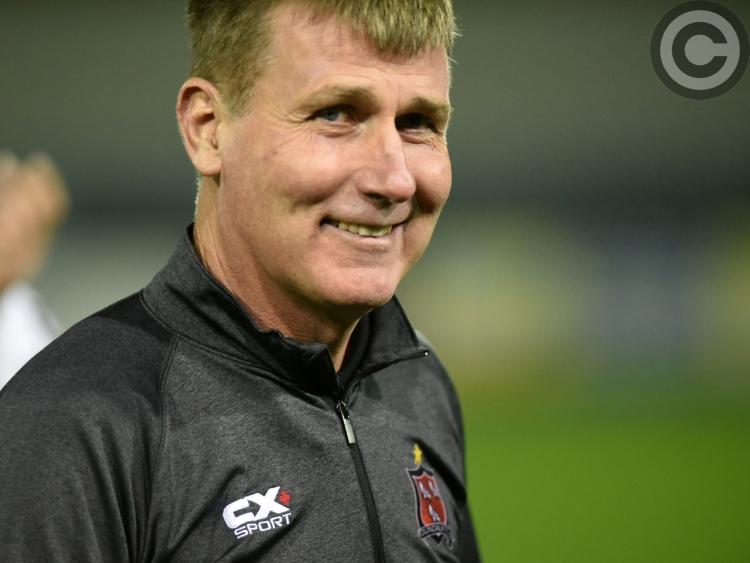 Inside Track has been oozing bias in recent weeks. When there should have been some chat about soccer, national and international, maybe rugby and the ongoing tussle between Pat Smullen and Colin Keane for the Irish Jockey Championship, it's been Dundalk Gaels and more Dundalk Gaels. You think they had made it to the county final, or something like that.

Dundalk and Martin O'Neill's Republic of Ireland team are doing fine without IT attention, the former making the final of the FA Cup for the third year running and doing enough as heel-snappers in the league, keeping Cork City honest.

You'd have to think RTE got it wrong by having the cameras at Finn Park on Saturday week last instead of at Tallaght for the Cup semi-final replay. Except that the points at stake in the North-West were only of value to the home side in their fight against relegation, there was little call for live coverage .

As it wasn't the most inviting fixture for them, given what had happened during the drawn match and in the town afterwards, plus Dundalk being allotted only a meagre number of tickets, Orielites would have welcomed a live screening of the latest in their side's ongoing tussle with Rovers.

In fairness to the national broadcaster, schedules, pieced together weeks and maybe months before the games are played, have to be adhered to; and when looking at the Finn Park match way back, the planners might have envisaged it being vital to Dundalk in the defence of their title.

Anyway, Stephen Kenny's side took full points off Harps, and a few days later escaped from the bear pit with a 4-2 extra-time Cup win. Since then there's been another win in the league, and in a few weeks' time they go head to head with another of their great rivals.

The season so far has been all about Dundalk and Cork City, and it's appropriate that both will be there to bring the curtain down.

Unless they do a Crisp or a Devon Lock, Cork will go into the European draw as league champions. They won't, however, be happy to leave it at that. They're Cup holders, having deprived Dundalk with a late strike last November, and with Conor McCormack - another Cooley sportsman starring on his travels away from the peninsula – in their ranks, they'll want to hold on to what they've got, bringing up the coveted double.

Dundalk will be no less determined. An early season wobble has long been overcome, and winning the premier knock-out would be some compensation for the loss of the big one.

In the absence of cameras at Tallaght last week, the two local radio stations kept the housebound informed. Ger Cunningham and John Murphy, Dundalk FM's answer to Keys and Gray (remember them?) got a dose of the verbals, and maybe more, from a Rovers supporter after the home team grabbed an equaliser with regulation time almost up.

Could you imagine what would have happened had Murphy come in for the same kind of interference in his days as a teak-tough, no-nonsense Dundalk full-back? His own words, “back row in the stand” come to mind.

Talk abut racehorses and close finishes. To many, the Republic of Ireland were a beaten docket with two World Cup qualifying games to go. Hopes got a mini boost with the home win over Moldova, but everything, and nearly everyone, pointed to a win for the Dragon on last week's visit to Cardiff.

James McClean can stir it up, both off and on the field. He can also score good goals, like the one he got to bundle Wales out of the competition. Full points from those two games has the Republic going into yet another big tournament play-off, the prospects of a green invasion of Russia on two fronts next summer still alive.

Whereas one of the two M O'Neill teams blossomed in the latter stages, the other came a cropper, but still has enough in the bag to go into the hat along with their southern counterparts.

The quest for the Irish Jockeys' Championship is hardly nail-biting stuff, but is interesting nonetheless. Pat Smullen is the title-holder, while Colin Keane has never before been in this particular winners' enclosure. The two are fighting it out, but to most punters, what's most important is being 'on' when either of them rides a winner.

As mentioned on this page before, Keane had his confidence boosted by Ger Lyons when he was made the Co Meath trainer's stable jockey not long after completing his apprenticeship. He has rewarded his guv'nor, who, undoubtedly, would derive great satisfaction from his young charge dethroning the champion.

What else has been happening while Gaels have been strutting their stuff? Pat Gilroy has landed the Dublin hurling job. Given the support of former Galway boss, Anthony Cunningham, and only half the riches the football management have behind them, the big man has more than an outside chance of becoming the first to mastermind an All-Ireland senior win in both codes.

And Colm Cooper? 'Gooch', one of Kerry's modern-day stars, is wrong to be trading with the popularity he gained in a game that has prospered over the years because a huge volunteer effort . He's staging a get-together which is set to bring in thousands. Had the entire proceeds been going to charities or good causes, I'd say 'yes' to him, go for it with the determination you showed – and are showing - on the field. But they're not. He's set for a huge windfall himself having already taken from the game, as a footballer, all of its biggest prizes.

I'd hate to see this being the first of such ventures.