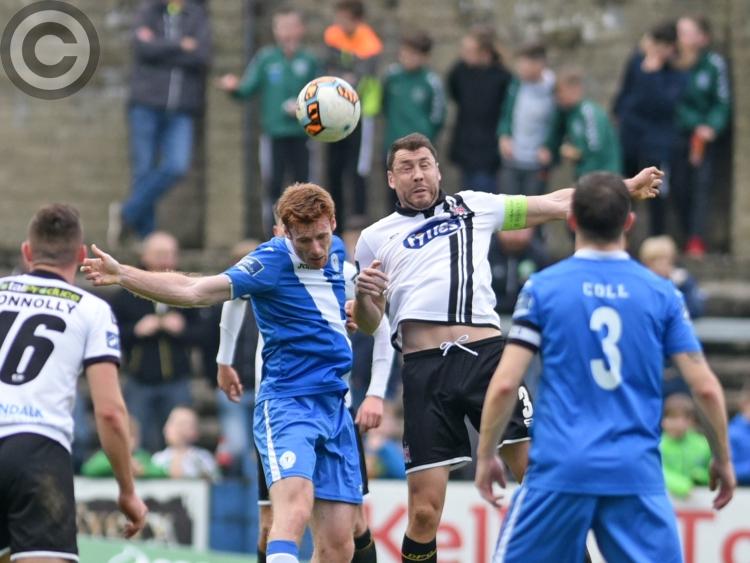 Brian Gartland’s fifth goal of the season and a fine individual effort from Jamie McGrath ensured Dundalk helped Finn Harps closer to the relegation trapdoor in Ballybofey this afternoon.

After an hour-plus of slog on a woeful Finn Park surface,  Gartland rose highest to nod McGrath’s accurate corner to the corner of the net. Indeed, once The Lilywhites took the lead on 66 minutes, the result never seemed in doubt.

However, McGrath put the seal on a 20th league victory of the season with a beautiful, dinked finish with the final kick of play

Having kept another clean sheet and given full league debuts to Carlton Ubaezuono and Jake O’Connor, along with the fact that Cork’s title coronation has been delayed yet again, Stephen Kenny will draw plenty of positives from the game. But perhaps he will take the most comfort from avoiding an addition to his already lengthy injury list.

Apart from having to play on a treacherous pitch, both Dylan Connolly and McGrath were on the receiving end of challenges which ought to have seen referee Paul Tuite brandish straight red cards.

Just prior to half-time, Connolly was lucky to limp away after Mark Timlin had chopped him down with a flying kick before McGrath was unceremoniously heaped over by Tommy McBride shortly after Dundalk went ahead. But, on both occasions, Tuite punished the aggressors with cautions – punishments which looked dubious on first viewing.

Dundalk were deserved winners, though had Harps been clinical – after recovering from a slow start – they could have taken much-needed points from their penultimate home fixture of the season.

Robbie Benson flicked wide early on for the visitors before Thomas Stewart drew a fine stop from Ciarán Gallagher. However, the most glorious first-half chance fell to Harps attacker Eddie Dsane. A mix-up between Gary Rogers and Brian Gartland saw Dsane presented with the ball and an empty goal, but from 18-yards the striker trickled an effort wide of the mark.

How did he miss that? Finn Harps' Eddie Dsane can't steer the ball home against Dundalk pic.twitter.com/nxCQSExytR

And Harps were made pay when Gartland put Dundalk in front. Substitute Michael Duffy went close to extending their advantage in injury-time while Rogers had to claw a header from Kilian Cantwell behind as the hosts went in search of a leveller.

But McGrath had the final say with a lovely finish over the advancing Gallagher in the fifth minute of stoppage time.