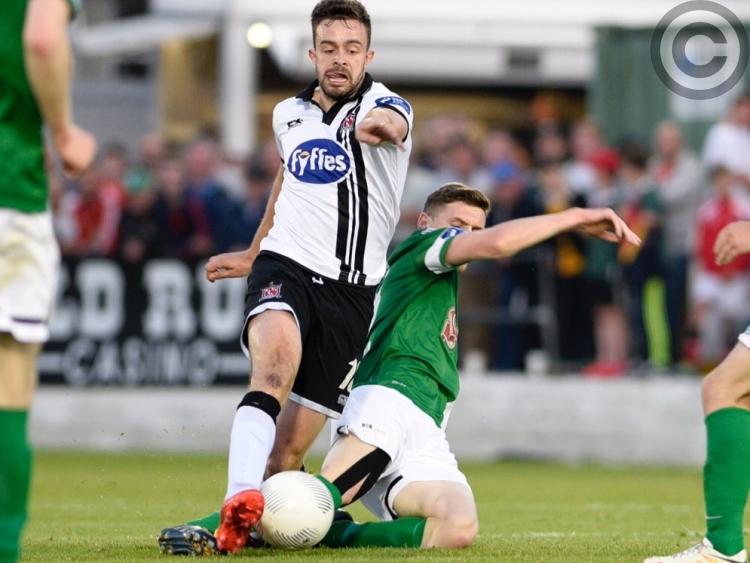 Robbie Benson endeared himself to Dundalk supporters with big European goals last season and he added another delightful notch to his collection at Turners Cross tonight.

The midfielder rescued the Lilywhites an 87th minute share of the spoils, poking home Dylan Connolly's cross. But perhaps most significantly he denied Cork the league title, if only for another round of matches.

While the Rebels were the better side, it was good fortune that saw them take the lead as Seán Hoare's attempted clearance deflected off the head of Brian Gartland and into the net, off the underside of the crossbar. And, typical of a game between the pair, the first goal looked set to prove decisive.

Dundalk carried more of an offensive threat in the second-half having held next to no presence up front prior to half-time. Patrick McEleney became more influential while Michael Duffy went close with a shot, but much of the visitors' play was on the periphery as Cork's defence remained resolute. That was until Connolly and Benson silenced the Shed End with an equaliser.

The Leesiders could have been further ahead at the break had it not been for some last ditch defending and good shot-stopping by Gary Rogers. The custodian was forced to acrobatically save from Garry Buckley before Cork full-back Jimmy Keohane hesitated, wasting another glorious opening to test Rogers.

But, with that goal in hand, City didn't have to force the issue in the second-half. The trend of the game, whereby Dundalk had to press for a leveller, suited Conor McCormack and Gearóid Morrissey down to the ground as the hosts crowded the centre of the pitch. The Lilywhites had simply no way through.

As alluded to earlier, Duffy had an effort on goal while Connolly stung the palms of Mark McNulty. But for their increased possession, Cork had as many clear-cut efforts in the second-period with Stephen Dooley's wicked free-kick almost fast-tracking their coronation.

However, just when it seemed as if the title celebrations could get underway, Benson popped up at the back post to at least delay, if not deny Cork the title.

Dundalk remain champions of Ireland, but only just...