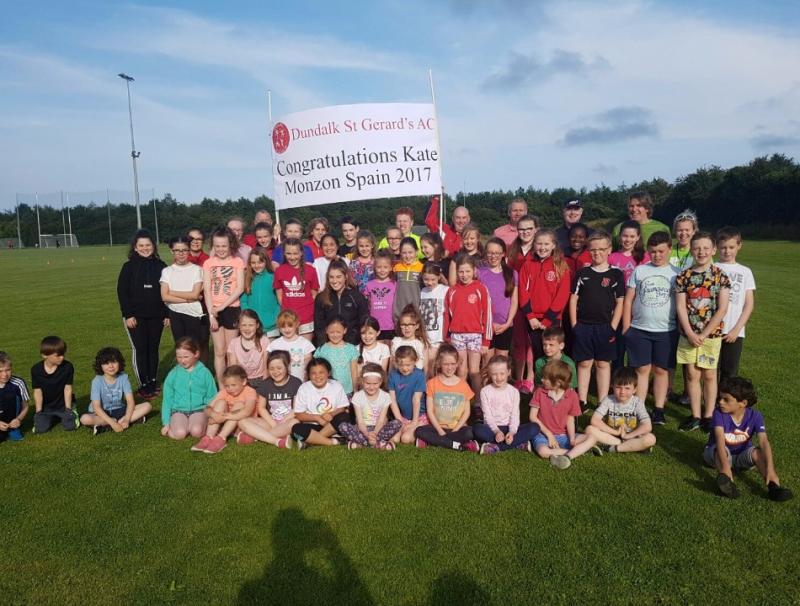 Kate O'Connor gets a warm welcome home from the athletes and coaches of Dundalk St Gerards AC after her brilliant performance in Monzon.

It was another busy weekend for the athletes of Dundalk St Gerard's AC on both the domestic and international fronts.

Kate was in action in the heptathlon competition over two days against a very strong field which included two time Olympic medalist Astra Skujyte of Lithuania. Against such opposition it was all about gaining experience, but once again Kate chose not to read the script. With the heptathlon events being largely power and speed based her age would no doubt be a disadvantage but her excellent recent form and brilliant competition temperament would prove invaluable assets. 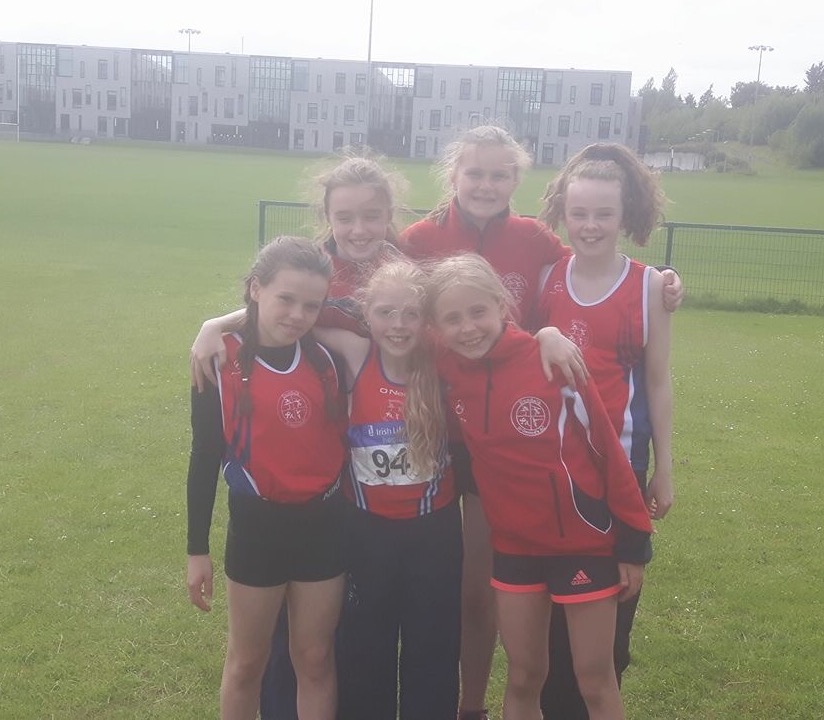 The Dundalk St Gerards's AC U12 girls relay team who finished 4th at the All Ireland relays in Athlone.

With some excellent performances in the 100m hurdles, high jump and shot put, Kate was in sixth place after three events. Another bold showing in the 200m moved her up to fifth place at the end of day one. With a best of 5.80m in the long jump, the opening event of day two Kate had moved into fourth place. A great javelin of 45m meant she held the same position going into the last event the 800m, however with a gap of 164 points to the third placed Greek athlete she would need to beat her rival by about thirteen seconds to overtake her. In a brilliant race Kate gave battle all the way with Slovakia's Lucia Slanikova, who herself was hoping to move from second into the lead. Driving each other on all the way Kate only gave best to her older rival to finish the race in second place in a time of 2.17.30 just over 13 seconds ahead of Greece's Sofia Infantidou to snatch third place by 10 points to finish with an overall total of 5,632 points just short of the Irish senior record.

The performance underlines why Kate is considered one of the top prospects in the sport and her brilliant performance is apt reward for all the hard work she has put in. Her dad Michael and all the event coaches deserve great credit also.

On Sunday, the U12 girls relay team took to the Athlone IT track with their main aim being to qualify for the final. Having finished outside of the medals at the provincial championships they had nonetheless shown great promise for a relatively new team. In the heat the girls smashed their previous PB by over one-second to finish runners up to Corks Leevale AC in 58 seconds and qualify for the final. In the final, the girls were brilliant as they smashed their PB once again to take fourth place in 57.55 seconds, just missing out on the medals but coming out best of the Leinster teams - showing how much they have improved over the last month. 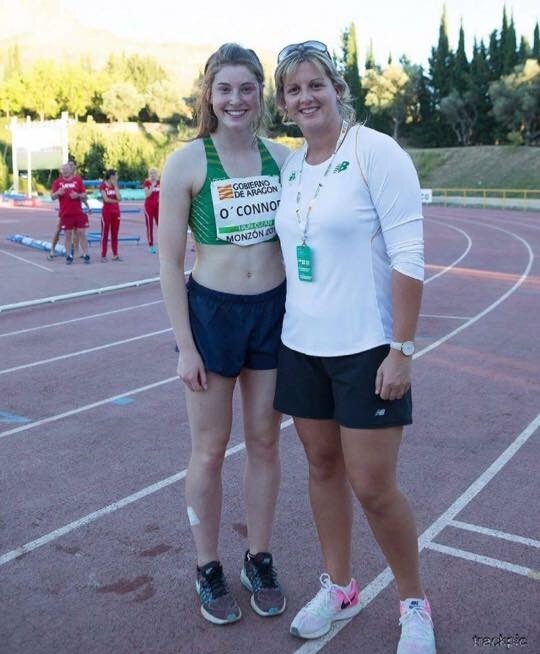 The girls have worked hard and deserve great credit for their efforts. Howeverm the improvements would also not have been possible without a great effort from their coaches led by Niall Hearty. In today's world where many so called YouTube experts are more interested in getting likes online by metaphorically borrowing your watch to tell you the time and taking credit for it, Niall possesses the often overlooked old fashioned characteristic of humility. In fact he is the epitome of what a good coach should be; diligent, selfless, humble, in the background fixing what needs fixing and letting the athletes take credit for their achievements.

In another great news story Patience Jumbo-Gula has been rewarded for her excellent recent form with selection for the Irish team in the upcoming European Youth Olympic Festival being held in Gyor, Hungary at the end of July in the 100m and 4 x 100m relay. This excellent news was followed by the confirmation that Kate O’Connor has been selected to represent Ireland at the European junior championships in Grosseto, Italy later this month in both heptathlon and long jump. This is another well deserved honour for Kate and another great opportunity for her to develop and progress her career.

The club is now taking a well earned summer break from training and will resume on Monday 24th July.