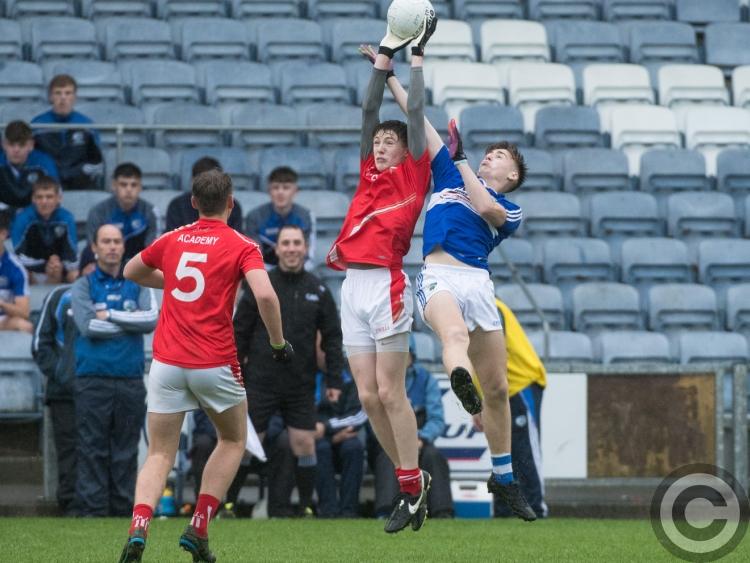 Given the fact that the Laois minors lost to Louth in the opening round of the Leinster Championship you would have expected a fairly close game at U17 level.

However, boosted by the fact that the Wee County had four key players missing due to their involvement in the Leinster Minor Football Championship semi-final next week, Laois eased their way into round two.

Louth opened the scoring with a Shane Matthews point, their only score from play in the game, before Laois took full control. Two Niall Dunne points were sandwiched with one from Jack Owens, before Damien McCaul grabbed the first of Laois’s goals with a nice finish after a one-two with Andrew Swayne. Owens grabbed a second Laois goal after showing a great bit of strength and blasting home.

Two-points from captain Colin Slevin and one from Dean Brophy put them in a commanding position just twelve minutes in.

Things got worse for Louth as Nuel Orinnka was black carded after a deliberate hit on Ronan Coffey. Matthews pointed over Louth’s second and last point of the half, with Laois netting two more goals before the end of the opening-period to put the game to bed.

Midfielder Swayne found the net for Laois’s third, before three-minutes later Mark Barry netted another with his second attempt after a superb catch by full-forward Owens, whom Louth couldn’t deal with it at all.

Laois were ahead by a score line of 4-6 to 0-2 at the break, but they were far from finished. Dunne put over a free to begin the second-half, followed by points from Slevin, Owens and McCaul. The latter and Barry further stretched Laois’ lead before a number of subs were brought in with around 15 minutes to play.

Substitute Cian Doyle put one between the posts with his first touch of the ball, and in the same minute Barry added another. Louth got their only point of the half through Shane Matthews, who scored all three of their points on the night. Owens found the net for a second time, and showed off his individual brilliance, tagging on another point and two goals.

Laois now await the draw for the next round, with Meath, Westmeath, Kildare and Longford all earning first round victories on the same night, while Louth await their back-door participation.