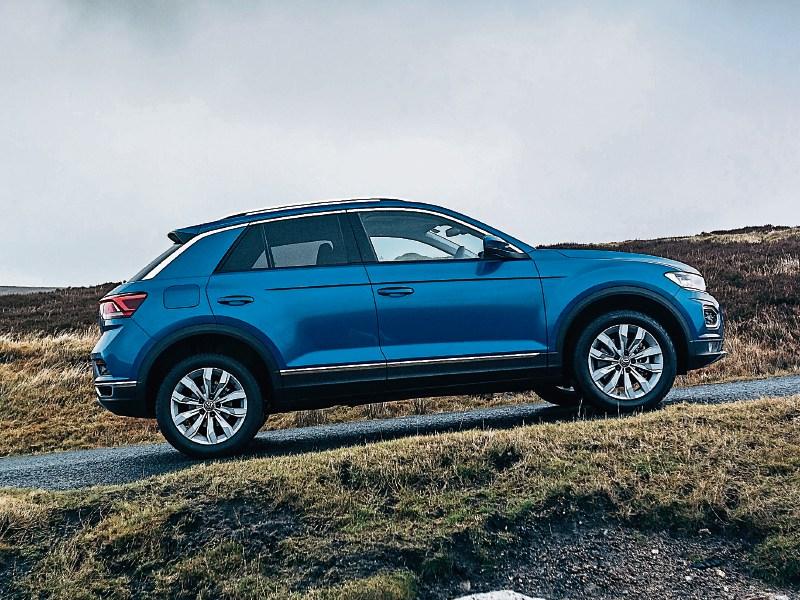 Will we ever settle the “do we buy cars they make” v the “do they make cars we buy” argument ever but a look at the VW model line-up and sales and we may end up at the end of this year that the Tiguan and T-Roc are VW’s best sellers.

So the cars in favour are out in force. We can’t get enough of the up high, crossovers. When we are all eventually driving them, which seems quite possible, will we all revert to a saloon when a car company’s brings it out as a “new model”? We’ll see. Meantime we play, I mean, review the models on the pitch. And the T-Roc sits as the natural evolution between a Golf and a Tiguan.

It’s an angular, crisp sharply looking car. That rear C Pilar is as raked as it gets giving the T-ROC a distinction in a sector of hard-to-differentiate sameness. It is unmistakably a VW with styling cues seen in other models and the blending works. Like a good scotch whisky you could say.

It doesn’t feel appreciably more spacious than the near flawless Golf so the expected internal growth doesn’t materialize. You’d need a Tiguan. Also, I wasn’t wowed by a step up in interior innovation as its very much VW as usual inside, good and all that it is. What you really get is a high Golf. The additional height is the benefit at the not significant expense of the ride you get in a Golf.

In perspective it’s still a lot more engaging than other crossovers to drive so it’s not all bad. I find judging handling in a crossover as pretty academic as they are not bought for haring around and generally they are not hared around. I know it’s probably a square circle but high seating and handling has yet to be mastered and probably won’t ever be.

The range is comprehensive with 2wd, 4wd, petrol and diesel engines and trims as well as options. It gets the full VW treatment there.

The T-Roc will sell like hot cakes but some people like theirs cold. When it comes to crossovers though I’m a bit of a cold person. It’s most likely going to be a top two or top three VW seller here this year. We love them and this is one of, if not the, best exponents of the medium priced compact crossovers.