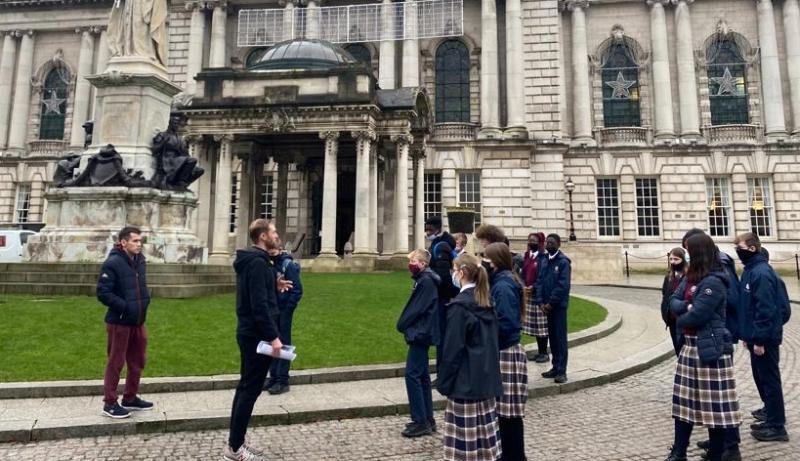 A group of keen second year historians in Coláiste Chú Chulainn have been working with a partner school in Northern Ireland as part of the Entwined Histories project.

Students visited Linen Hall Library and City Hall in Belfast last month where they got tours of the buildings and got a grounding in the history of partition from the instructors from Co-operation Ireland.

They also did a ‘script development day’ with students from Lagan college Belfast in the Carrickdale Hotel on the 16th November, to plan how best to explore the lives and contributions of Michael Collins and James Craig to life on this island through the medium of film.

The Entwined Histories project brings schools, north and south, together to explore significant anniversaries and themes emerging from the Decade of Centenaries.

Students from each school have been tasked with, and given instructions on, creating a short film on a chosen topic.
Next, the groups will work together over two day-long workshops, directing and filming their production before a premiere of their films at the end of the year.

History teacher, Mr Fisher, speaking of the project said: "This is our fourth year involved with Entwined Histories, it’s an excellent incitive that creates a lot of excitement around our shared history and incentivises thorough historical research.

"I’m glad we are continuing to play a role in it this year and the students are very much enjoying representing the school."